Let me take you back in time…back to when I was the tender age of 12, in the seventh grade. It was an awkward time…I had a mouthful of braces, was gawky and had the remnants of a bad perm…music and movies were a means by which I could escape from the awkwardness of Teenland into a cool world of fantasy full of awesomeness. At this time, the older sis and I would frequently go to the cinema. With boredom, our proximity to downtown Sudbury, and an attempt by my Mom to get us out of her hair, we saw many movies in the theatre between 1985 and 1988. It was a fun way to spend a Saturday night.

One of my absolute favourite movies that I saw in the theatre during that time was John Hughes’ Some Kind of Wonderful, starring Eric Stoltz, Mary Stuart Masterson and Lea Thompson. The movie was released in theatres in the Fall of 1987, and tells the tale of working-class high-school senior, Keith, his friendship with Tomboy, Watts, and his attraction to fellow student, Amanda, who is also from his working-class neighbourhood…but who has somehow crashed the popularity glass ceiling in high school and is part of the it crowd.

The crux of the story is Keith’s crush on Amanda, and how he plans to ask Amanda out on a date. He recruits Watts’s aid, and manages to wrangle help from the big gun skids from detention. Good thing because Keith is up against some serious shit. Amanda has just broken up with her rich, popular, and possessive asshole boyfriend, Hardy Jenns; a vindictive mec who threatens to ruin Amanda’s “rep” if she doesn’t get back with his lying cheating ass. Another strike against Amanda is having the most vile and venomous girl”friends” who abandon her when she decides to go out with grease-monkey Keith instead of reconciling with Hardy. Meanwhile, Keith is dealing with an overbearing father who is riding his ass about going to college. Then he has to put up with best friend, Watts’ opinions about his taste in girls – which is a ruse because, well, while Tomboy Watts herself dresses masculine, denounces men publicly and is accused of being a lesbian, she is secretly in love with Keith.

“Guys are so sickening. Really, it must be a drag to be a slave to the male sex drive.” – Watts

In terms of characters, I thought Watts was the coolest chick on the block. First, I liked her sense of style that didn’t mirror anyone else. I mean, the girl was allowed to play drums at home (poorly, as my mature eye sees it now) but I only wished I could have ditched the piano for my own kit at 13*! She was also a strong and bold gal who stood up for herself when people called her names. Lastly, Watts was a faithful and altruistic friend, always there, willing to help Keith hook up with Amanda, all the while sacrificing her own tender feelings for him and dying a little on the inside. I liked Watts. There is a little of Watts in me, for sure. Especially the last part about sacrificing your feelings to help your male friend / crush hook up with other girls (ouch, that hurts…). 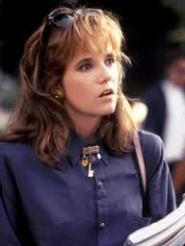 Amanda and Hardy – a match made in hell?

It’s not hard to know why sexually frustrated Keith chased after Amanda; she is easy on the eyes and in the bedroom. What I don’t get is why Hardy Jenns (that’s right, with two “nns”), her asshole boyfriend, would need her. The movie has him successfully chasing tail all over high school while dating Amanda, using his popularity to get his way. …And uh, why is he popular? He’s a conniving donkey! Amanda isn’t much better, really. In fact, her behavior is pretty vile, purposefully agreeing to go out with Keith to make Hardy jealous, knowing how Keith feels about her. (Can you tell I’m not a fan of Amanda’s?)

And while we say Keith gets the stubby end, he doesn’t fare much better with me. He’s cute with gorgeous blue eyes, but makes some questionable choices. He is an amazing painter with tons of potential, and instead of studying Fine Arts after high school like he wanted to, he decides instead to blow his entire first year College tuition on a pair of diamond earrings he planned to give to Amanda on their first date. Although considered a romantic gesture in my 12-year-old mind, I remember thinking that this was a pretty stupid move. I was not surprised his Dad blew a massive gasket.

The best character in Some Kind of Wonderful was Duncan, played by Elias Koteas. He is the leader of the detention pack who helped Keith get his date with Amanda, and uses his muscle to eliminate some of Hardy Jenns’ obstacles. Duncan has an attitude that goes against the societal grain – he has a rough skinhead exterior, counters authority, but overall he sees the good in people and is kind. I like him because he is the only one who is completely transparent – what you see is what you get. 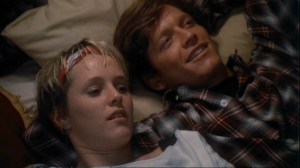 I know it may seem like I’m picking apart Some Kind of Wonderful’s characters and plot, but for all its faults, I have loved this movie from the first time I watched it. It has all the elements that would attract a young teen girl to its story – conflict among peer groups, the desire to fit in, and the need to break free of the rules laid out by parents…. The strongest one here is the complexities of love and relationships. Hughes took imperfect and complex characters and crafted an interesting yarn that is still watchable today.

And now, some fun facts about Some Kind of Wonderful in my life:

*Made up for it at 28 when I had my own house and my own rec room…and my own drum kit.

Follow Caught Me Gaming on WordPress.com
Join 749 other followers