Theatre of the Absurd is a game I bought on Steam in May 2014 in a Silverback Games gamepack. Silverback Games is a Canadian developer that brought us the great Empress of the Deep series (“The Darkest Secret” got a 4.75/5 from me when I reviewed it September 2014!). And on preview, Theatre of the Absurd looked like creepy fun. What could go wrong?

Scarlet Frost is an expert on the occult who is called to Doctor Corvus’s estate one dark night to authenticate his Habsburg cube, a red box that holds a captured demon. The troubled Corvus loses his temper and throws the cube, shattering it and unleashing the demon who captures and possesses his young daughter. Scarlet is to use her forces of good to save the young girl. She is tasked with exploring Dr. Corvus’s weird “theatre of the absurd,” a massive mansion, to find pieces of a magical bell that will exorcise the demon. Each room is creepy, and demonstrates Corvus’s disturbing obsession with the devil.

I could really buy into the darkness vibe of Theatre of the Absurd. The music was foreboding, and there were some unexpected jump-scare moments not often seen in a hidden object game. However, the story itself was pretty thin and the tasks and puzzles were repetitive and uninspired. 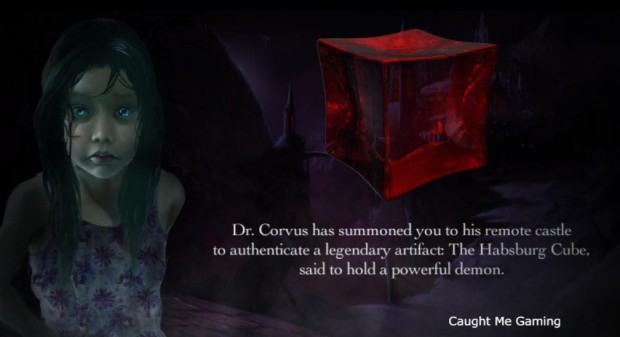 In the first scene, you are having to save Corvus’s daughter by giving her water of Horus, an elixir that would temporarily relieve her of her possession. This could only mean the potion would wear off, and you would have to find more water of Horus to help her. I had enough of this task by the second time…

It didn’t help there were elements of the game that I feel were unrefined. Some of the hidden object scenes were blurry to the point I was reduced to pixel-hunting around and using hints to find certain objects. The puzzles felt ho hum fare (run steam through the pipes). And while I pile on, I also noticed odd errors in navigation in the game: an arrow would direct you to go one way, only to click it once to have you loop back to where you stood!

I tried to forge ahead with Theatre of the Absurd but alas, I found myself losing interest by the third chapter. Maybe someone else will feel this game is fun, but I would highly suggest you try Silverback’s much better offering, Empress of the Deep: the Darkest Secret.