For over two years now, the hubs and I have been seeking co-op hack-and-slash RPG games in the dungeon-crawler vein of Torchlight or Victor Vran. We had recently tried Grim Dawn, but exhausted it. All through playing these games, the hubs wanted to play Diablo 2, but it was always too expensive to buy on Blizzard’s Battlenet. Finally, with a game-breaking glitch experienced with a recent play of Sacred at Christmastime, we were left hanging. I told him we should just buy Diablo 2 already; we hadn’t splurged for our wedding anniversary in the fall, so why not?! Glad we did; Diablo 2 is certainly one of the best in the dungeon-crawler genre!

Diablo 2, as you might expect from its name is a “conquer the evil” type game. This game starts where its predecessor, Diablo (1996), ends. The hero who captured Diablo in the first game has become corrupted and now Diablo’s hoard which include his bros of Darkness, Mephisto and Baal, have joined the evil party, wrecking havoc in the world. As a wanderer through town, you hear these stories of evil from the townfolk and take up the fight.

Diablo 2 being a typical RPG, you must manage your weapons, armor, skills and health in an inventory. Each town has its own merchant and people you encounter that direct you to quests. The missions have you explore landscapes and dungeons, fighting dragons, possessed ogres and demons, and of course spiders (no game of this nature would be complete without some insects!). Players are able to escape an area and return to town through portals accessed via town scrolls purchased through the merchants. With each level up, you can assign skills to a skill tree, and with that assign special skills to your weapons. 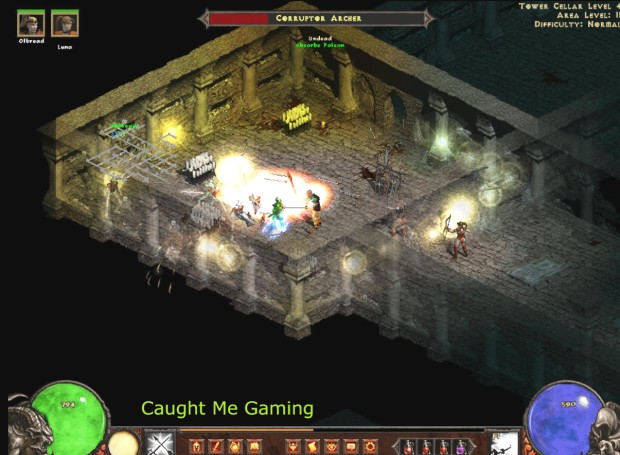 The game consists of 4 Acts, with an expansion game called Lord of Destruction. The hubs and I played the game together on PC over our LAN. We started playing Diablo 2 at Christmas. With 5 character classes to choose from (Amazonian, Necromancer, Sorceress, Paladin and Barbarian), I chose an Amazonian female I called “Olbag” (as always). Olbag’s specialty is archery and throwing spears and javelins; she was a lot of fun. I got only so far into the game when some weird Windows update caused me not to be able to use my original profile. Sigh! Alrighty, then; I started over with an Amazonian I called “Olbitty.”

This second time around, as we progressed into Diablo 2, we experienced some things about it that we figured came down to the game’s age. The most significant of which was the fact that if you died you lost everything, including items in your inventory, all your money, the armor on your back and any weapons you were carrying, unless you traveled back to your corpse and reclaimed it! This is a common experience in games like these that you must be mindful of. At least Diablo 2 provides you with a personal stash in town outside of your main inventory where you could store a weapon or two, along with some extra health potions and armor to tide you over; otherwise you are fighting to return to your corpse with only the clothes on your back (a common situation I found myself in)! The inventory was also teeny tiny to start until you got a Horadric cube in Act 2 that expanded the inventory space. 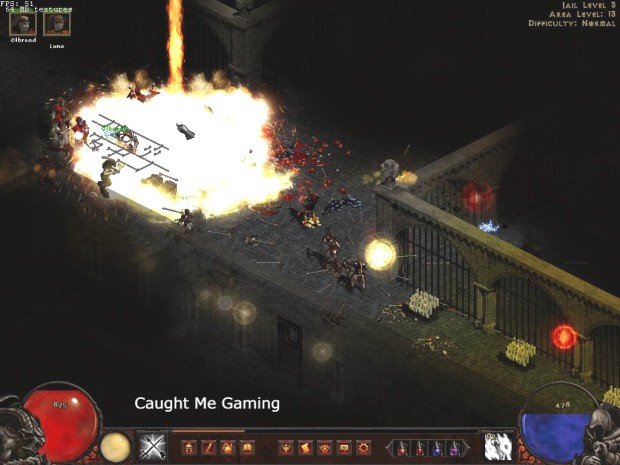 I assigned the Rain of Vengeance skill to my bow, which would to shoot a radius of arrows at enemies!

The hubs and I were enjoying Diablo 2 enough, and put up with its shortcomings. Out of curiosity, he decided to explore any mods that might improve the gameplay. With a game as old as Diablo 2, there had to be something out there…and he found it in the Diablo 2 Median XL overhaul mod. The hubs tried it on his own and was impressed. What this meant though was that we would have to start the game over again, including a new profile. I left Olbitty behind at Level 12 and welcomed “Olbread”! 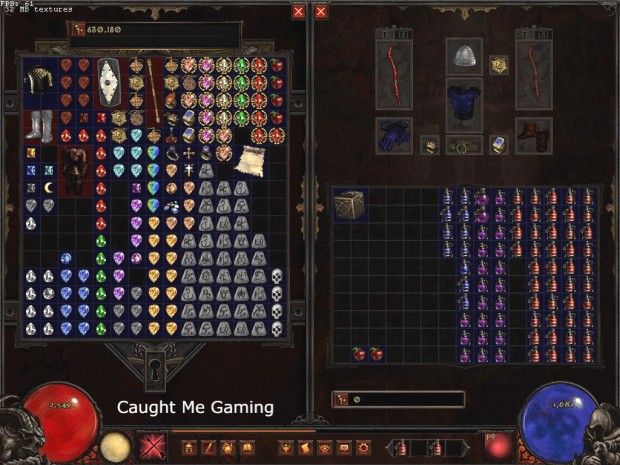 The inventory space given after mod.

With the Median XL mod, my enjoyment of Diablo 2 rose tenfold. Immediately at Act 1, gamers were blessed with the Horadric cube, thus starting out with a large inventory. We were also able to port to town whenever we liked instead of having to buy town scrolls. The quality of the weapon drops increased and any gold picked up between you and your co-op partner were shared between you. You also got to keep everything you held in your inventory if you died, which happened to me a lot in later Acts. Leveling up progressed quickly in this game – before I knew it, I had exceeded my Level 12 spot within an evening. One thing that was missing from Diablo 2 was a jeweler / gem meister that could remove gems from socketed items. I seem to recall this dynamic from Diablo 3…thankfully, the gem drops were frequent and useful throughout the game.

I definitely recommend Diablo 2! It’s a fantastic dungeon-crawler hack-and-slash game, and is definitely fun in co-op. I would hazard its replayability is quite high too. Make sure to check out the Median XL mod, you won’t regret it!