It’s taken me a while to get back to posting on here this summer, ’cause like last summer and the summer before: I am too damn busy in the summertime. There hasn’t been a whole lot of gaming, but a lot of other stuff happening…Rust never sleeps, and apparently neither are we at the House of Sim! This here is an abridged update of what I have been up to. It was monumental to say the least!

First stop, Sudbury, Ontario. This time last year, no one thought we’d be cleaning out a house that has been lived in for 42 years, with the plan to put it up for sale. Alas, that is what happened. My husband’s mother, newly widowed, recruited a team (us “kids”) to help her downsize and pack. Her hope is to move away to the Ottawa Valley this coming Fall to be closer to the grandkids. The majority of our time up north was spent on this emotional task, and mission accomplished; we were successful! The house is currently up for sale…but it was a backbreaking (and heartbreaking) haul. A lot of beer and chocolate were consumed. The ordeal was mostly unpleasant, but it emphasized the importance of family. Thankfully, the house was equiped with a pool so we would be able to cool off. Damn, I’m gonna miss that pool…

It wasn’t all a slog, however. We managed to step out and have some day trips around the city, including a stop at Dynamic Earth, Sudbury’s tourist destination on the history of mining in the region. I hadn’t been here since a class trip in grade 6…And, it appears they polished up the Big Nickel just for us! 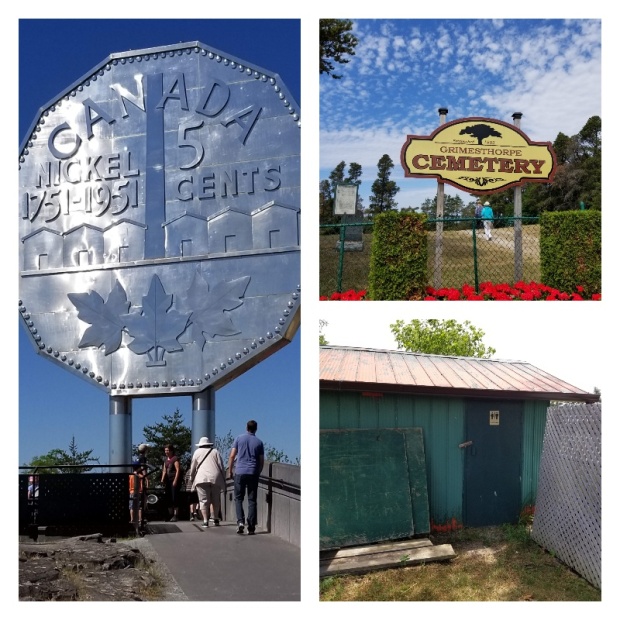 I was also thankful to spend time with my family which I needed desperately. We planned a day trip that saw my whole fam jam loaded up into a mini van and embarked on a brief stint to Manitoulin Island, the geographic epicentre of my maternal heritage. This might sound morbid, but we spent our time visiting grave sites. Grimesthorpe cemetary in Spring Bay basically holds a large portion of my maternal lineage, including my Grandparents. It’s so peaceful there, the only thing you hear are the squirrels protesting you are around their domain. Then, my great uncle is buried in another quiet cemetary that has the cleanest outhouse. We rounded out the day with ice cream from Farquhar’s Dairy. These things might sound mundane, but this is the kind of subdued activity I needed.

Clearing out my husband’s childhood home got us to thinking about our own “stuff.” Let me put it out there: My husband and I collect things. We love video games, books, movies, music and other sorts of pop culture memorabilia. We got stuff. But, after spending 12 days straight pitching other people’s stuff, it got us to thinking about our own cherished items. Are they really cherished?? We both conceded how anxious we were feeling about our own stuff cluttering up the house. A proposal was given from the hubs – let’s go through our stuff. Let’s decide what is important, let’s pitch what isn’t. Let’s lose the stuff meant for “one day…” If you haven’t touched it in 5 years, you don’t need it. We’ve lived in our current home for 12 years; we have STUFF.

My name is Sarca and I hoard books. Things haven’t gotten much better from this 2014 post, except I read around 5-10 books a year now, which is an accomplishment. Last summer (2017) I activated my Markham Public Library eBook account, which is another avenue to read…I just never stopped buying the physical copies. I know Mr. Books will have a heart attack (brace yourself Aaron…), but I packed up the majority of my books, and sent 10 boxes to the junk shop! Yes, 10 boxes. I have kept key ones from my favourite authors as well as graphic novels that will never be digitized…the rest went. It wasn’t easy, but I feel a weight lifted and some control over my stuff. I found myself looking around my house critically and asking, “What else can I lose?” 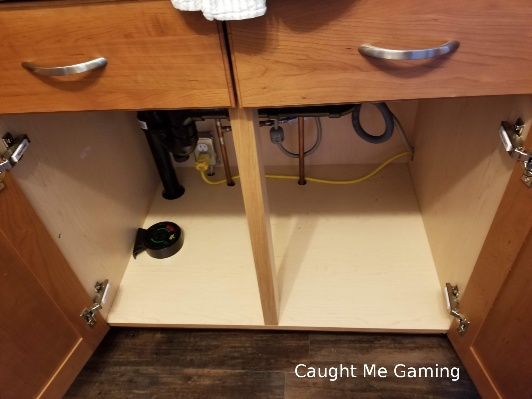 Time to catch that guy!

But before the purging of our stuff began, imagine coming home exhausted from a trip up north only to find your house scattered with mouse scat. This happened. I noticed poop on the kitchen counter, and then in the living room. We then noticed our Ikea couch had been scratched up a little. We sprung into action immediately, cleaning and disinfecting every room. I wanted to clean under the beds while on vacation, I just didn’t want to clean them in such an emergency! We discovered through trial and error the little guy was living under our kitchen sink in the space between the cabinet and the floor. We can only suspect he got in through the door to the garage (we have had some issues in the past with mice on our property getting into our garage looking for seed). No food was ever eaten from our kitchen, and the mouse was eventually caught. Talk about the best case scenario of what could have been a disasterous situation.

After spending less than 6 hours in Portland, Oregon and the ordeal behind such a short trip, I developed some adverse reaction to travel. I didn’t want to go anywhere, nor drive, nor navigate anywhere unfamiliar. An opportunity presented itself that would allow me to be a passenger on a trip to Chicago, Illinois to attend the inaugeral Cartridge Club Con, and I jumped at it. I rode in a van with my husband and 3 other guys and it was good times.

There were several highlights from the drive up:

A pit stop in Detroit, Michigan to Third Man Records was pretty cool. This is Jack White’s pressing plant and storefront. It oozed coolness. 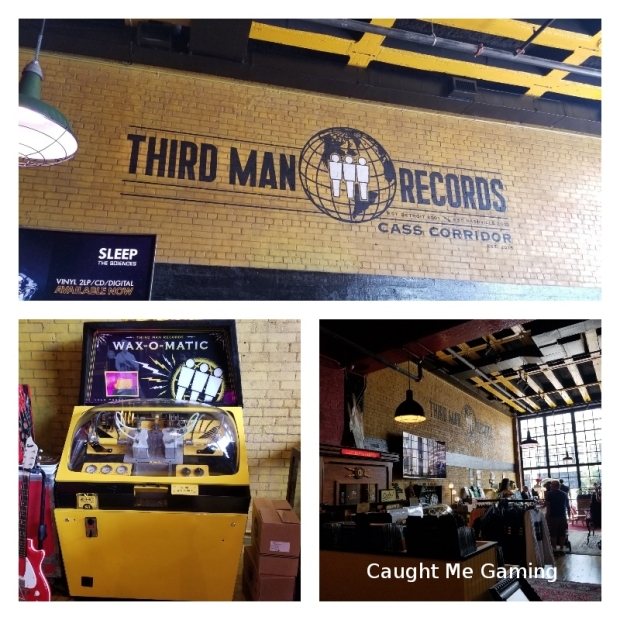 We stopped for supper at a diner in Toledo, Ohio that had 20 different kinds of pie; I tried the Scutterbotch pie, which was a butterscotch pudding filling and whipped cream. Delish! 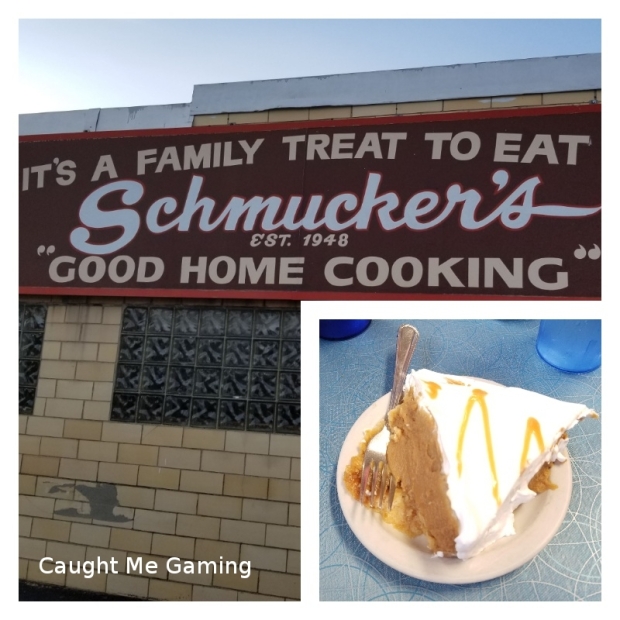 Along the way we stopped in to a Dunkin’ Donuts for coffee. Let me give you a short “For the Love of ‘Fee”…Dunkin’, your ‘fee ain’t worth the $2.50 U.S. for a medium. It tasted burnt, and what is with the price point; are you trying to be Starbucks? An interesting side-note – the coffee cups were made of styrofoam, which is not something we see in my area any more (ours are paper; styrofoam is not recycled). 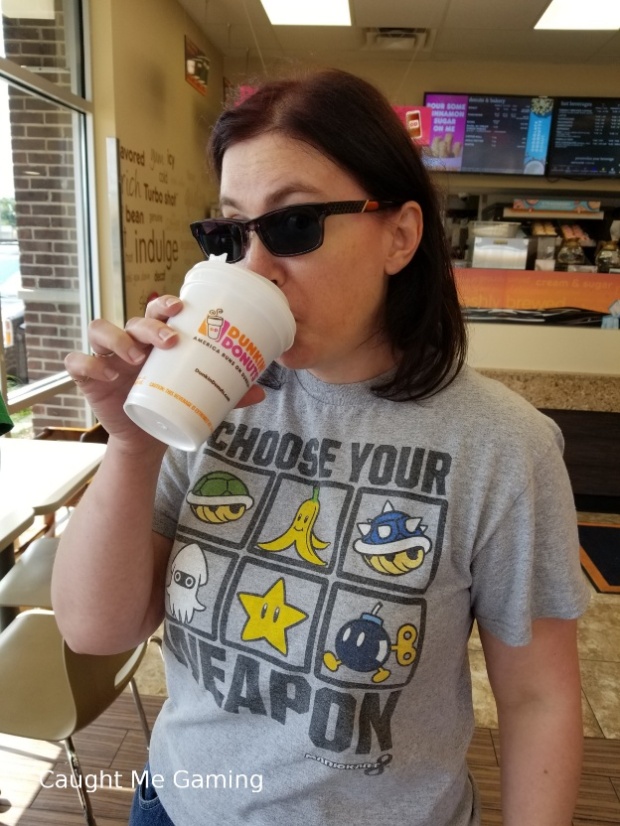 Did you have any doubt there’d be coffee-drinking?

We stopped in to a Walmart in Elkhart, Indiana. Cheap liquor, weird sugery cereal and Chicken in a Biskit crackers couldn’t keep us away. I was most pleased to find Downy fabric softener balls which are no longer sold in Canada; I picked up three. 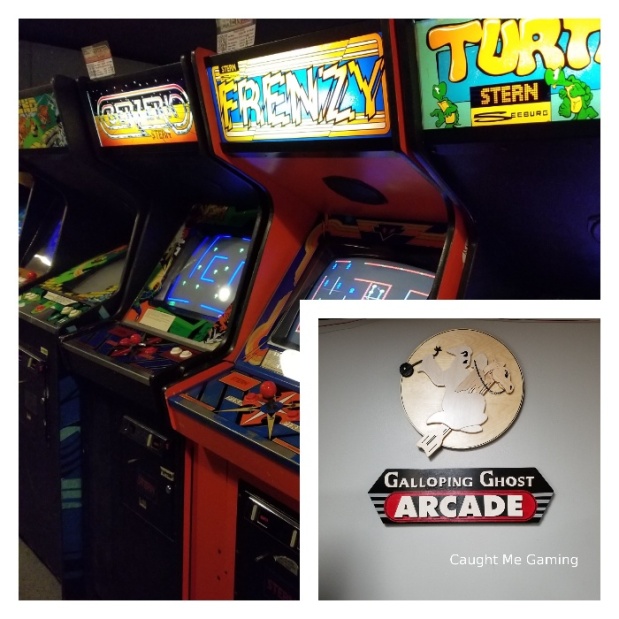 This pic doesn’t do it justice – over 600 cabinets!

It was exciting to go to Chicago. I got to meet up with some friends from the Club, try some Chicago deep dish pizza, and go to Galloping Ghost, a legit arcade. The unfortunate part was that there just wasn’t enough time to do any Chicago sight-seeing. We were only there for 2 days. We’ll have to go back… 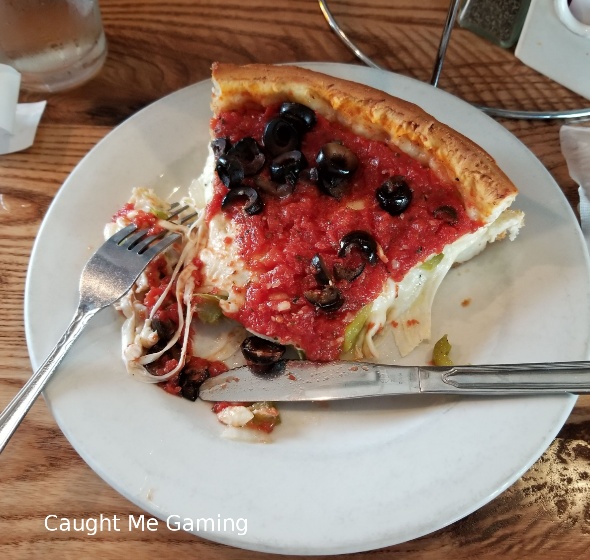 Two weeks ago, we went to Montreal. Planning this trip was like, “It’s a long weekend…Let’s go to Montreal!” Alrighty then! The plan was to go record store shopping. I’d only driven past Montreal on the way to Old Quebec City (grade 8 class trip…), so this was going to be fun. 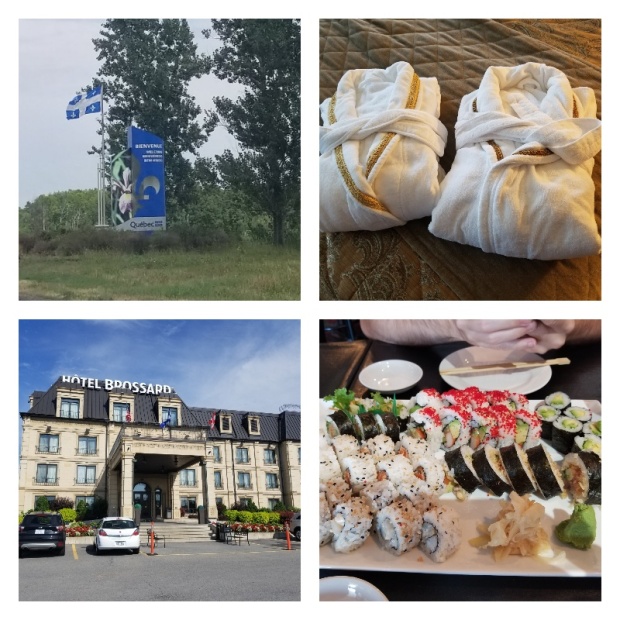 The hubs lined up the Hotel Brossard, a hotel off the island. We managed to get there with only one detour away from the toll road. It was a lovely hotel – King sized bed and terrycloth bathrobes! Our first night, we had sushi from a local joint; it was awesome!

The next day, we embarked on a full-day record store shopping spree. We just had to wait for the record stores to open! So, we went to see a Picasso exhibit at the Musee des Beaux-Arts. Picasso is my favourite, so I had a good time… 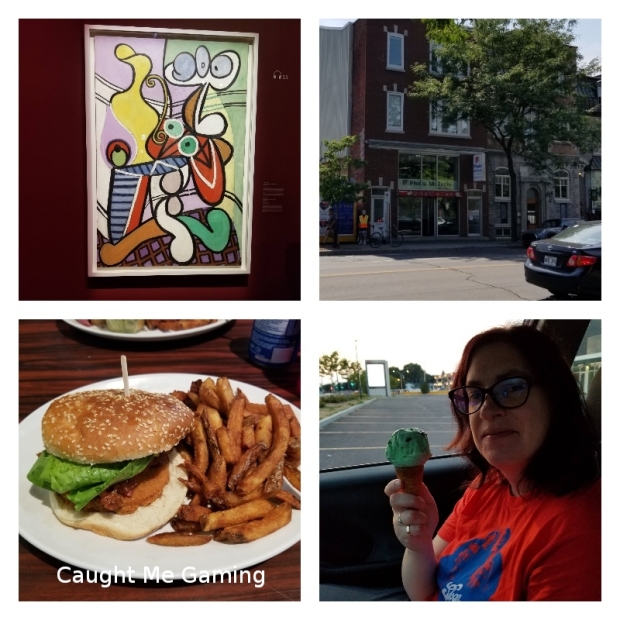 We then walked to three record stores. It was a hot one that day and none of these places were air conditioned; I never sweat so much! But, it was loads of fun and we picked up a good haul (pick up video to follow on the hubs’ YouTube channel).

The hubs also wanted some Montreal Smoked Meat. We tried to get into Schwartz’s deli, a world-famous joint, but the line was a mile long. We went across the street instead to the Main Deli. He had his smoked meat sandwich, and I had a chicken sandwich with fries. So good! We rounded out the day with some ice cream from a parlour close to our hotel.

I tried to practice my French a little while in Quebec, but no one in Montreal would have it and would speak to me in English (I suppose it was my mangled Anglicized accent that gave me away!). Overall the trip was successful, and we hope to go back soon.

And there you have it. It’s been a short summer, with a lot of stuff crammed in. I hope you enjoyed reading! What have you been up to this summer?