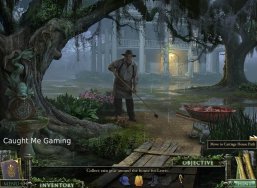 Sara and Marcus Lawson move from Ohio into a run-down mansion amid the swampy bayous of Louisiana, along with their daughter Magnolia. Soon after settling in, Marcus goes missing, and Sara calls upon you, a detective, to find him. In the meantime, you must rummage through this dirty creepy mansion, interview rednecks and avoid alligators all in the name of detective work, just so you can locate Sara’s husband. While gathering evidence, you discover that the mansion and town are steeped in pirate history, the townfolk are superstitious and a brigand by the name of Phineas Crown once lived and buried his treasure at the mansion. There is also gossip around town of the curse of the 13th Skull, a spell that is cast on anyone who locates the treasure. Sooner or later, Marcus is found, along with some interesting plot twists. Arr Matey!

13th Skull is a point and click hidden object adventure game that does very well to encapsulate a feeling of the old South with its characters, settings and music. The puzzles in this game are typical, but fun and challenging. What sets this one apart from other HOGs, is the use of live-action interview scenes that the gamer is made to participate in to advance the story. The major characters of the story – Sara Lawson, her daughter Magnolia, their superstitious housekeepers, and some town locals are represented. The game places the full-motion actor within the game’s UI, so it appears as though the actor is living in this virtual world. The interview part is an interesting aspect and enriches the experience. The acting? Well…it’s a bit cheesy and exaggerated, but I liked how Big Fish Games tried to do something different within a hidden object game.

Although the puzzles were challenging in 13th Skull, there happened to be several instances where you would have to scour the game’s numerous scenes, including the bar, swamp, cemetery and the Lawson house’s 10 rooms to find one single object needed to continue in the story. At the end of the puzzle, it was easy to lose track of where you are going and what you were supposed to be doing next. This is a minor critique, and the game comes with a walkthough to help you out, if you are so inclined to use it.

Critiques aside, 13th Skull is a fun game that shouldn’t be missed, and fits nicely within the pantheon of Mystery Case Files games.