Princess Isabella is set to marry her beloved Prince Adam, but an evil witch has put a curse on the entire castle. All who live there have been locked away in a series of mirrors which have been shattered and scattered throughout the castle. You must find the mirror shards to free your loved ones. Each room is locked within the castle which you must open to free the curse. A combo of puzzles, hidden object scenes and scattered mirror shards are available in each space. A fairy follows you throughout the game, providing you guidance and hints, as well as the ability to cast spells. Once all the mirror shards are found, you are to fit them together in each mirror frame to make an image of a loved one to free them from their curse. 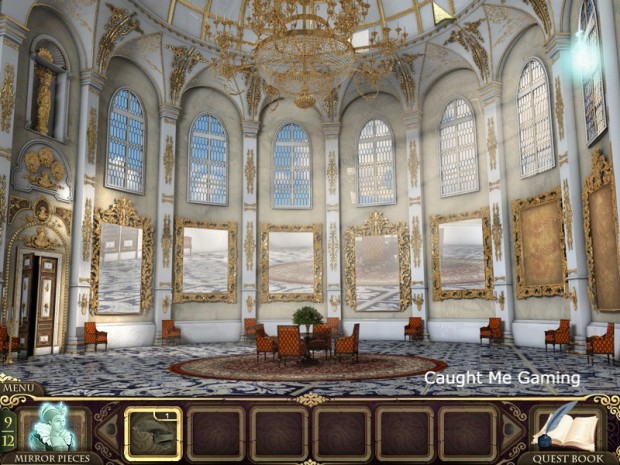 When I found Princess Isabella: A Witch’s Curse on sale on Steam, the comments about it were generally positive. A game from 2009, Princess Isabella seemed to conjure up very happy memories for some from when they would play casual games as children. This game was also a nice bonding experience between parents (and in some cases, grandparents) and their kids who would play together. People were going on about how good a game this was, so when it was on sale, I snapped it up. On preview, its graphics appeared a bit dated, but I wanted to see what the fuss was about.

Considered one of the first of its kind according to some sources, Princess Isabella has the notoriety of being one of the first hidden object games to follow a non-linear environment. Most HOGs from this era forced you to follow a certain series of steps to proceed in the game, but Princess Isabella allows you to move freely from room to room as you wish, which is helpful as there are about 20 rooms to navigate. Thankfully, there is also a trusty map to allow you to port to a particular room quickly, and even provides guidance if there is a task that still needs completing (…and y’all know how I appreciate a good map!).

As an expert HOG player and seasoned reviewer, I am careful not to criticize the decade-old Princess Isabella too much. The game is generally meant for newcomers to the genre, not for the expert, although I think it has something to offer both camps. Some of the charms of this game could also be construed as irritating. The constant hinting by the fairy who is always there in wait, as well as the continuous unskippable dialogue would be extremely helpful for some, but would surely grate on others. I chose to mute my game and listen to some music instead of relying on the soundtrack, and my enjoyment of the game improved tenfold. I mean, everything is better with the very à propos RUSH A Farewell to Kings playing in the background!

Overall, Princess Isabella: a Witch’s Curse wasn’t a bad game at all. I would definitely recommend it for newcomers to the genre, and even to the seasoned gamer… It is usually cheap on Steam…so why not?