Wayyy back in my early renaissance gaming days (2010), I was ripping through hidden object games at a voracious pace. I would play any hidden object game I could possibly find out there on the internet. Big Fish Games, the pioneers of bringing casual gaming to the people, had it where one could download a game and play it for one hour without paying for it. A great deal to me! It is a great way to play without pay, and decide if it would be money well-spent.

One of the early hidden object games I played was A Gypsy’s Tale: Tower of Secrets. Wow, that was a good game – so good, I remember scenes and details to this day. Last year during a Canada Day 2-4-1 sale, I sprung up the money and bought a digital copy from Big Fish Games.

How does it hold up?

To start, I ran into a problem with the game running on my Windows 10 machine – the graphics card did some funky jive and the game looked like garbage on my TV. I knew this was a possible outcome, what with a game that is close to ten years old. But I hoped BFG had fixed the resolution to these old games enough that they would adjust to large TV screens. Unfortunately not. I wound up installing and playing the game on an old Windows XP desktop my husband had Frankensteined together, and played the game to completion, seated at a desk, using an old LED monitor. It was just like old times! But dammit, sometimes, it’s the only way to play these old standards!

In a Gypsy’s Tale, you are a gypsy hired by a monk to break a spell that has fallen on an old town, the cause of it, a possessed young woman in a tower. Who is this woman? Why the spell? The monk urges you to hurry, but the path to the tower is a labyrinth of locales, each with its own set of mazes, puzzles and characters that finally lead to the woman. 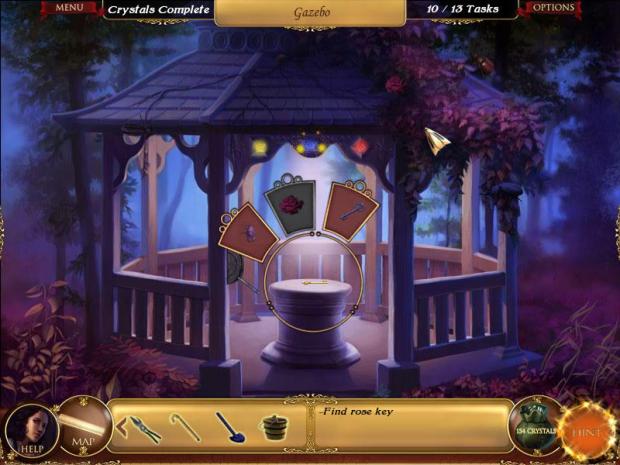 A Gypsy’s Tale has a clicheed plot, but the gameplay is pretty damn good, and once you get it running, it looks pretty good graphically for its age. There is an inventory to hold your items and a decent map where you are able to warp to different areas in this world. As well, the game gives you cues on tasks that need completing.

The game has a look and feel of the Treasure Seekers series, where the puzzles are challenging and fun, with a unique hidden object system that has you find pieces of an inventory item (i.e., a spade end and a handle to make a shovel) that are to be assembled into something before you can use it. Instead of search items by word, you search by shape of object, which stylistically is my preference, and different from standard HOG fare. You also collect a certain amount of crystals in each scene – little glowing specs that unlock areas on your map and provide needed currency, used to purchase items in the old town’s general store. 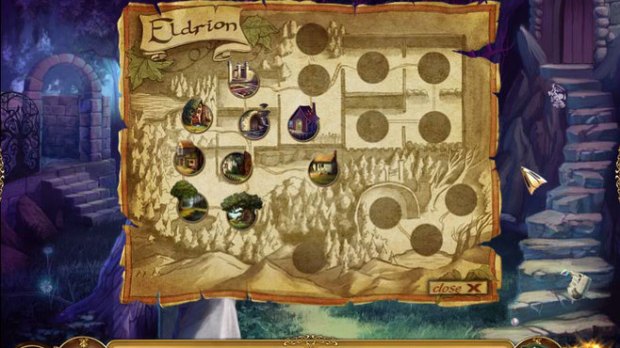 Aside from finding items, a Gypsy’s Tale gives you missions to complete that may seem arbitrary to the plot. At the same time, the game is so forgiving and relaxing, you find yourself say, “Sure!” and complete the task. At one point in the game, every spot on the map is open to you and you are made to go back to old haunts to finish up tasks. The clues to the tasks are not always clear, and this caused me to backtrack into rooms quite a bit, trying to figure out what I was supposed to do next. Thanks to the map however, I was able to warp back and forth easily and return to where I was originally without much difficulty.

Overall, a Gypsy’s Tale: Tower of Secrets will forever be in my pantheon of decent hidden object games. If you ever need a starting point to casual gaming, I highly recommend this one. Don’t be surprised if by the time you finish you become addicted to the genre!