All aboard for more Titanic-themed games! Let’s look at what’s available on the mobile market…

This next game review is for a game that is not that bad compared to what I have been playing lately…but it does have one major hiccup. I came upon Titanic’s Keys to the Past after having played a succession of very crappy “Escape the Titanic”-type games (I won’t waste your time on those…). Keys to the Past is a National Geographic game that I actually think is meant for children since Nat Geo have it up on their “Kids” website. I didn’t find the game immature; on the contrary, it was quite history driven, informative and entertaining.

You play as Lillian; someone whose family lineage has ties with the Titanic’s maiden voyage in 1912…Lillian’s great-great grandmother, Rosemary, was a nurse on-board the ship. The story goes that she tried, in vain, to save some people from certain fate, but they were in the third class area of the ship, and the gates separating class areas were locked up, preventing anyone in those areas from being able to flee to the lifeboats. Your great-great-grandmother did not have the necessary keys to open the gate, so she was not able to save those souls, and she too died, knowing she couldn’t save them. 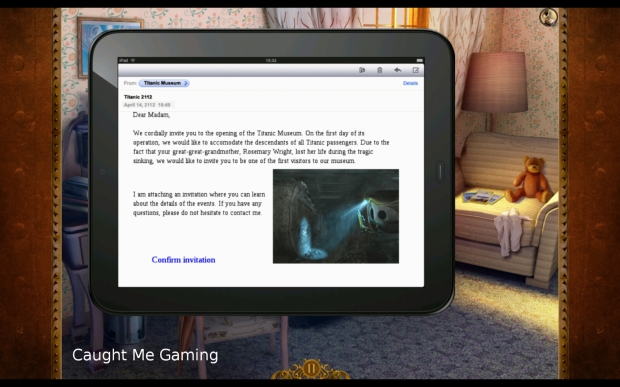 Because of her family connection, Lillian is invited to the grand opening of the newly-built Titanic museum; a self-contained ocean-floor conservatory of the sunken ship. The museum conducts tours of what is left of the ship, with informative exhibits about the Titanic, including its history and information about the fateful night. While on the tour, she happens to find her great-great-grandmother’s half-broken medallion among the ruins of the ship. Upon this discovery, Lillian encounters the spirit of Rosemary, who tells Lillian her story and begs her to help her by going back in time to collect keys that will open the gates and save those people from certain death. To help her, Rosemary transports Lillian through time, back to 1912 via a mirror to allow her to search for these keys. You lead Lillian through the ship, exploring rooms and completing a variety of puzzles, to be rewarded with a precious key. Collect all six keys to fulfill Rosemary’s desire to save those people.

Let’s be honest: as odd as this game’s plot sounds, Titanic’s Keys to the Past was a gasp of fresh air compared to the flotsam of the last few Titanic games I have played lately. Each puzzle was, at the very least, easy enough to figure out. Puzzles vary from HOGs, to mazes, to “unscramble to picture,” to “match the images”. The puzzles were admittedly not difficult, but were a decent pastime, fun enough to play through. In some cases you are able to bypass a puzzle by playing a match-three game instead, but there is a catch in choosing it…you are told you need to match three items enough to gain 200 points in 2 minutes and 40 seconds – it’s harder than it looks! Why such a random time? You got me!

Probably the best part about Titanic’s Keys to the Past that added to the enjoyment of the game was the fact that I could SEE! Images were clear, even when zoomed in. This game is also a port from PC, and unlike game ports to the Nintendo handhelds that I have experienced as of late, this port to android is adapted well for touch screens.

With all the positive feedback I could give to Titanic’s Keys to the Past, I can only wish the game didn’t crash so damn much…Yes, yes, this game crashed…several times. Enough to really piss people off on the reviews on Google Play. I have no idea why there were crashes. If I were playing this game on my old android ASUS eeePad Transformer tablet, I might explain that it was me crashing – not the game (in its twilight years, everything was crashing on that thing), but, I have a Samsung Galaxy Tab A now with the latest OS – no reason for crashes. Keys to the Past crashed a lot, but thankfully it auto-saved, so not much was lost in the way of game progress. Despite this snafu, amazingly, I was a CHAMP, exercising patience and restraint with this game, seeing it to the end. 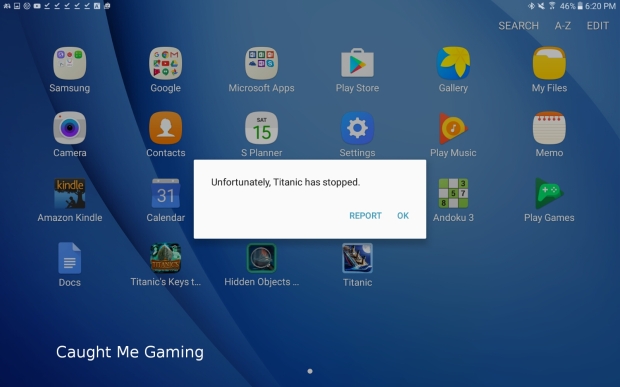 Titanic’s Keys to the Past costs ~$3.50 on Google Play…Would I pay for this knowing it has this crashing problem?…Hmm, let me be contrary, and say probably not. However! I have hope the developers fix this issue so I could get behind it fully. I actually don’t think this game is that bad…but it does need fixing…

Titanic’s Keys to the Past
Apar Games
2012