The latter half of 2016 is where I hit quite a dry spell in the gaming department. No time! With a busy time at work and kitchen renos, it just seemed like I couldn’t get there. It wasn’t until Christmas 2016 when I finally got back at it thanks to a stint in the Borderlands again (the DLC’s great) that got the craving flowing, so to speak, for more heavy gaming.

Action RPGs are fast becoming an immersive favourite of mine, and I never thought I would get there. I have played several, from Mass Effect, to BioShock, to the Torchlight series and of course, Borderlands, but playing them has always come as a suggestion from the hubs, and never from me. RPGs can have a bit of learning curve – for one thing, you often have to manage your character and weapons quite a bit, and know what you are doing so you don’t die repeatedly. Some of these games give you strict parameters, such as only being allowed to carry a certain number of weapons on your adventures, or penalize you for dying, either by reducing your money or energy. My most recent RPG, Victor Vran, actually got all the elements right and was a fun game to play.

Victor Vran was a game that was sitting in my wish list on Steam for at least a year. Once the hubs and I had finished Borderlands 2, we were searching for another game like it to play together, and came upon this one. It wasn’t cheap – $27.99 to be exact…sorry, too rich for my blood! I put it on a wish list and hoped for a sale. It wasn’t until a Winter sale on GOG saw the price reduce to $12.99 that I took the plunge. It was definitely money well spent.

The fantasy city of Zagoravia has had an evil curse befall it. Vampires, insects, skeletons and zombies are overrunning the city, and the Queen seeks help. In comes Victor Vran; just some demon hunter dude who was passing through and who gets recruited to help find out who is responsible for the curse and why.

Victor Vran, unlike other RPGs, provides a simplicity in practically every aspect that anyone new to the genre could get behind. It has an easily accessible hub / menu system where you can access and swap out weapons with ease. You don’t have to choose a character class to Victor; instead you are given a choice of wardrobe, which in itself will give you more armor, critical hits in combat, or health regeneration, depending on which you choose. My Victor was dressed in the finest Zealot’s outfit, one that provides a high armor rate. Along the way, Victor collects weapons and demon powers in dungeon-crawling and loot drops. Each level offers something interesting and challenging in their venues and boss fights. Most levels offered secret passageways that were difficult to locate, but where you were rewarded with a treasure chest containing bonus gold or other prizes. Each level has a star rating to indicate difficulty. The game challenges the player to ramp up the difficulty within each level by turning on provided hexes that give constraints (such as bosses become more powerful, armor takes longer to regenerate, your health takes a huge hit when under attack…). It’s an additional challenge that can become addicting; seeing a four-star rating at each level across a map gives you a sense of accomplishment! 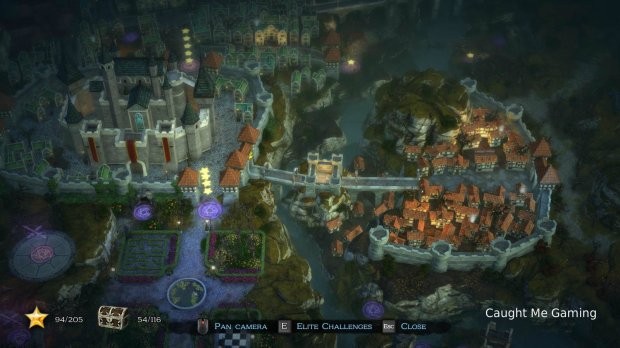 This game offers what seems like a limitless amount of inventory slots, the likes of which I doubt I have ever seen ever in playing an ARPG. You then have to go through and figure out which ones to equip in your weapons and power slots which can seem like a daunting task. The weapons provided give you varied choice – rifles, bow and arrows, scythes, hammers, and swords – all with their own powers and deficits. My weapon of choice happened to be a Coldsnap Scythe, one with a sharp blade and frosting powers that become more powerful the more I used it. 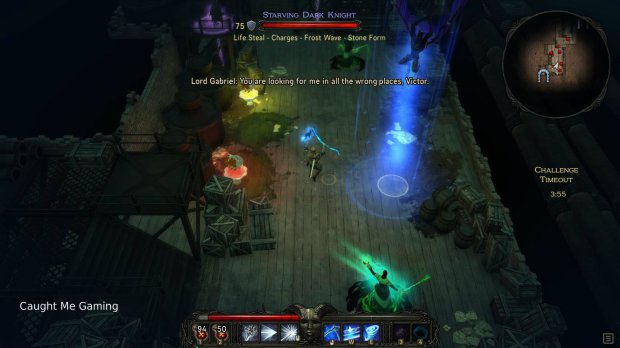 There is also the ability to add powers to weapons and outfits to make them more powerful by transmutting them, a method by which you would pair the item of choice with a demon power from your inventory. If there was anything that I found confusing, it would have been how to transmute something. I managed to add powers to a few weapons, but the game offered a recipe guide that sort of confused me and I never got that aspect working satisfactorily. But, it didn’t seem to matter in the long run. As long as I had a decent weapon, I got through; everything evened out.

There is some cheesy humour in Victor Vran, from the snide remarks coming from a disembodied voiceover, to some of the enchanted dancers and skeletons that can enrapt Victor, and even get him dancing. One could easily draw comparisons to Diablo 3 and even the Torchlight series in terms of the type of demons you fight and the dungeon-crawling; the similarities abound, which, for those in love with the Diablo canon, may hate on Victor Vran for some of its simplistic characteristics. For others, they might find comfort in finding a game that can tide them over until the next Diablo is released (whenever that happens); your mileage may vary. I, for one, enjoyed this experience, and recommend the game!

P.S. I just learned a few weeks ago that a Motorhead expansion for Victor Vran was in development, and is supposed to be released later in 2017. Apparently, members of the band were consulted. I have no idea what this will look like, but I am definitely interested!