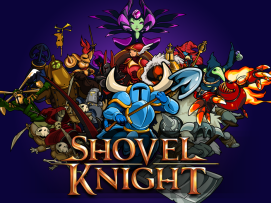 Shovel Knight, it’s not you, it’s me.

I thought I would join in and play the Cartridge Club’s game of the month for August, instead of going my own way. I had no idea what I was getting into, but was soon introduced to a lil dude dressed in an iron suit that uses a shovel instead of a sword. He’s cute, and blue, and he won me over. It started out a typical platformer, that was easy enough to play. Looks can be deceiving, however…

Shovel Knight is similar to Mario games, in that you lead Shovel Knight through mazes, up ladders and push through obstacles to proceed to the end boss. You are given a map to maneuvre to the next stage, and as you finish a stage or defeat a boss, another area of the map unlocks. Along the way, Shovel Knight uses his shovel to dig tunnels and find needed treasure.

The game looked good, and was totally playable…up to a point. I’m not sure what I was doing wrong, but while playing on 3DS, I could not get Shovel Knight to jump right…or he kept dying…or I couldn’t fire his flare wand right. I tried really hard to push through, and wanted to succeed. I even started the game again on the XBox One to find out if maybe the 3DS’s controls were messing me up. Unfortunately, it didn’t seem to matter; as much as I enjoyed what I did play of Shovel Knight, I just could not progress in the game. 4.5 hours later, and I was still on level 2. …And I chose to walk away satisfied in knowing I played Shovel Knight as well as I could. Nothing is wrong with this game, except that it was too difficult for me. Kudos to those who played it all the way through.