Collaboration post! 1537 and Caught Me Gaming have joined blogging forces to bring you a fulsome review of the game, Everybody’s Gone to the Rapture: I take on the game, 1537 takes on the soundtrack! Please go read his fantastic post here! 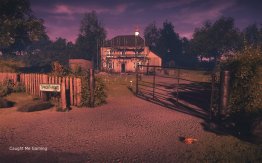 About eight years ago, I read a book called, “the World Without Us,” which looks at how planet Earth would manage if humans were to suddenly disappear (Spoiler alert: the world would get on just fine without us). Whenever I hear of games where I explore abandoned towns, this book pops into my head. Without having all the information, a game title like Everybody’s Gone to the Rapture conjures up thoughts of this deserted earth. What should I expect? The environment overrun with weeds? Should I bring a machete?

With talks of a rapture, I also thought I would get some doomish church sermon out of it too. Thankfully, there was no such sermon, or talk of Armageddon for that matter. But, this game does leave one with thoughts and questions that last beyond the end of the game.

Everybody’s Gone to the Rapture (referred to as ‘Rapture going forward) is a mystery adventure game that takes the form of a first-person walking simulator. You are dropped in the middle of a small English village where all its inhabitants have disappeared. You are left to wander the town, exploring buildings to get clues as to what happened there. Interactions with phones and radios randomly scattered throughout the village allow users to hear odd messages from Scientist Katherine (Kate) Collins, and her husband Stephen Appleton who both worked at the town’s Observatory and who were trying to find an explanation for the mysterious patterns of light that have suddenly appeared in the sky. With it is a desperation to find a correlation between the light and the terrifying health-related illnesses happening to the local townfolk. The game also delves into the personal lives of Stephen and Kate and their interactions and interrelationships with the locals. Orbs of light are found everywhere within the game, are non-threatening, and very much used as a device of guidance when one gets disoriented. They also invite players to interact with them to trigger cuts scenes that tell a richer story of what happened here.

A walking simulator such as ‘Rapture where there is no threat of attack or enemy is a blissful experience. The scenery in the game was so realistic and lovely. Combined with a beautiful soundtrack that marries an atmospheric opera with minimalistic music, you get a sense of what you would experience playing this game. Yet… there is definitely a creepy, unsettled feeling, walking through this abandoned town, into people’s homes, half expecting to run into someone…and maybe I’ve played too many survival horror games, but I for sure thought a zombie was gonna jump-scare me straight from my relaxed state. The most unsettling had to have been the beep-booping sounds coming from random radios and phones found scattered in backyards and along to streets.

There is plenty done right in ‘Rapture. For one thing, I have to give props to the devs, The Chinese Room, for creating a game that honours accessibility, particularly for the hard of hearing. Not only does the game have optional closed captioning, but also the ability to make the audio cues visual, as in the instance of a radio making sound, it will show a flashing icon in the direction of the sound. Also, often I get motion sickness with first-person walking simulators without a cross-hair in the centre of the screen, and thankfully, ‘Rapture has that option.

The game was originally made for the PS4, and ported to the PC. Having played the PC version with mouse and keyboard, I have to say it played okay, if it had a few rendering issues with objects appearing blurry at times. But, predominantly my main complaint had more to do with a very fundamental device that was missing from the PC version – a PROPER manual save. That’s right folks, there was no ability to save at will within the game… that is until The Chinese Room heard the ire of fellow gamers who were asking for refunds because of it…. The only time the game would save your progress was when you would find a glowing orb that would change into a cut scene. For a game that is open-world – that encourages the player to wander and explore – it was impractical to walk around and NOT have a manual save state. The first evening I spent in ‘Rapture, I wandered for an hour and a half, but it only saved 25 minutes worth of gameplay. What’s the point? I looked online for a solution, and thankfully, the developers pushed a patch that allowed players to click on framed maps found around the tiny village to save the game manually (this solution was found on Steam in the forums here, in case anyone is interested). Incidentally, this does not seem to be an issue for the PS4 – they have a suspend mode whereby the game can be paused, which was not possible with the PC version. Anyway, props to the devs for fixing this downright annoying problem. Why they didn’t think of this as a problem before, I have no idea.

Overall, I didn’t regret my time spent in ‘Rapture. It’s a gorgeous game, and if walking simulators are your bag, don’t pass this one by!

Thanks to 1537 for the game suggestion and the idea to join forces! Now go read his review here!