Last weekend, my husband and I decided to go to a show. We don’t often make a point of going (the last movie we saw was the new Star Wars movie, and before that…well, read about that experience here). Lunch and a movie? Ok! But, when the hubs announced we were going to see Deadpool, I was secretly a little apprehensive.

First, I was not familiar with this “Deadpool” before. Did I want to blow my $12 on something I didn’t really know? I had heard of The Dead Pool with Clint Eastwood (Dirty Harry, anyone?); was it anything similar? Ok, ok, I knew Deadpool was a comic book character, but that was as far as it goes. I’ve watched many X-Men movies, but he didn’t stand out to me if he was in any of them.

What I know as Dead Pool…no?

Further apprehension: he is a comic book character. Anyone think there is a bit of saturation with the Marvel / DC universes on film and TV lately? It’s not like I am tired of their stories: I have been a willing audience, and have been actually enjoying Daredevil, Jessica Jones, the Avengers, anything Tony Stark…so, I have gotten over the “oh gee, another comic book character adapted for the big screen…” But, is there room for yet one more?

Wade Wilson (Ryan Reynolds), is an ex-military mercenary living his life in New York City. One evening, at his best friend’s bar, he meets Vanessa (Morena Bacarrain), an escort. They fall in love with plans to marry. Shortly after they become enfianced, Wade is diagnosed with terminal Cancer. He gets approached by a recruiter who proposes a treatment that would cure him of his Cancer. After weighing his options, he decides to leave Vanessa, and go ahead with treatment administered by the evil Ajax (Ed Skrein) and his assistant, Angel Dust (Gina Carano). Upon meeting Ajax, Wade instantly dislikes him. He is administered a serum that is supposed to awaken latent mutant genes that will kill the Cancer, but it doesn’t work. Wade was not pleased with this outcome, and upon finding out Ajax’s real name – Francis Freeman – he decides to taunt and tease him. Ajax’s response is to confine Wade in a coffin-like chamber to undergo torture and oxygen deprivation for days. This is when Ajax reveals his real intentions: to create super-powered slaves to be sold to wealthy customers. Wade eventually breaks free from his chamber, but not before the serum finally takes full effect, curing his Cancer, but also disfiguring him.

After his escape, he exacts a plan to track down Ajax to have the disfigurement reversed, but not before creating a kickass costume to cover his disfigurement. He also comes up with the alias Deadpool. This new mutation that cured his Cancer, but that has left him disfigured has given him other abilities which helps him with his goal: ninja-like agility, and surprisingly the ability to grow back limbs! While on his pilgrimage, two X-Men, Colossus (Stefan Kapicic) and Negasonic Teenage Warhead (Brianna Hildebrand), seek Deadpool to recruit him into the X-Men. He convinces these two to help him in his fight against Ajax, and together they unleash a wrath of carnage against Ajax and his henchmen. 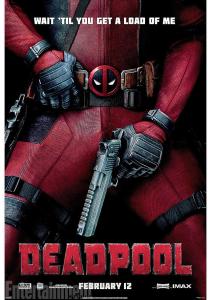 Deadpool is an enjoyable wild ride to say the least. It incorporates several genres into one film: action, romance and comedy. The action sequences make up the majority of Deadpool, and they had me at the edge of my seat for most of the movie. The one thing I was surprised about was that such a darkly-themed film would have such hilarity. Wade Wilson is very funny, and with the Deadpool costume on, he is hilarious. But, a word about the humour of the film: be warned, Deadpool is absurd and crass. I wouldn’t say the humour would sit well with everyone, particularly children, as Deadpool does very much push the R-rating envelope. But, I liked Deadpool’s flavour, and found him endearing in such a way that I rooted for him and wanted to see him succeed. Ryan Reynolds was the engine that drove Deadpool. Humour is not new with him (Van Wilder). He can certainly deliver a joke well, and I enjoyed him in this role. 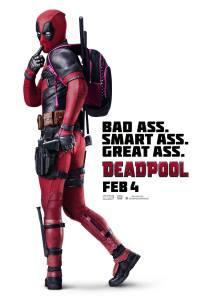 In response to my rhetorical question – yes – if done well, I think there is room for “one more comic book character” adapted further into media. Deadpool is quickly becoming a favourite of mine, and I look forward to seeing more of what Hollywood has in store for this character.