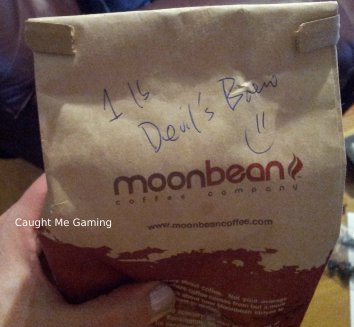 ‘For the Love of ‘Fee’ is one coffee-lover’s attempt to machete through the tangle of coffee beans and brews to find an awesome cup of coffee. Juan Valdez follows ME! 🙂

This coffee came into my life a couple of weeks ago, thanks to my friend Aaron at Keeps Me Alive! (Read more on that here!) A recent jaunt to Toronto offered him the opportunity to stop by his favourite coffee destination, Moonbean Coffee Company and pick up one of his favourite roasts, Devil’s Brew. Of course, being a java lover myself, he was gracious enough to send me a lb of beans through Canada Post.  I imagine its smell intoxicated the mailman, and everyone I share a community mail box with as it was obvious coffee was packed in the box Aaron sent me –  a bold, but glorious aroma of coffee permeated. I must submit, Moonbean is quickly becoming a favourite coffee of mine, even though I have never stepped foot in the joint!

When I first looked at the bag of beans, I originally thought the name of the brew was “Devil’s Bone”* which, wound up to be just how Aaron scribbled the name on the bag. I confirmed the true name via email, and Aaron and I had a good “LOL” (insert dirty minded thoughts about bags, beans and bones here. Go on, guys…I’m waiting…;)).

After I had finished my bag of Kicking Horse Three Sisters coffee, I then started in on the Devil’s Brew, and just enjoyed it every morning, until we arrive at this morning when I discovered I only had enough grounds for one more pot of this glorious brew!

Oh oh! Better get on that ‘fee review before it’s ALL GONE!

How It Smells and Tastes

Devil’s Brew lives up to its name, particularly when the beans are ground. The aroma is robust, almost fiery! I don’t know if it’s my imagination, but I can smell hints of hickory, chilies and…garlic? as an after-scent. The whole house smells divine! The taste of this coffee is also something to behold: not as bold in taste as the grounds would have you believe, but it’s smooth with a slight kick that will get your bag of bones going in the morn’!

So. If you are ever in Toronto proper (which I avoid most of the time) near Kensington Market, check out Moonbean’s brews. They are the Devil’s Brew, and they are divine!

Thanks again to Aaron at Keeps Me Alive for enlightening me once again with the gift of coffee! 🙂

“Coffee, tea and R n’ B. We’re really cookin’ ! What exactly, we’ll leave that for you to figure out…”

Casey’s Bar and Grill is a restaurant chain that originated in Sudbury, Ontario, but has several locations around Ontario and Quebec. In 1996, they had a promotion where if you order dessert with your meal, you’d get a free coffee and a keepsake mug. The mug, as you can see, has poorly executed caricatures of four popular recording artists, excluding B.B. King (RIP). I somehow wound up with three of these mugs at one point, thanks to a thought less ex-boyfriend who jokingly figured that my one mug I acquired at a birthday dinner wasn’t enough. (In an unrelated bitter story, the cheap bastard actually wrapped one of these up for me for Christmas! Cool story, bro.)

My husband hates this mug. I hang on to it because of B.B., the practicality of having something to drink out of and for shits and giggles, but it is quite unattractive drinking coffee out of a mug with Mick Jagger’s face looking like it was hit by a bus…