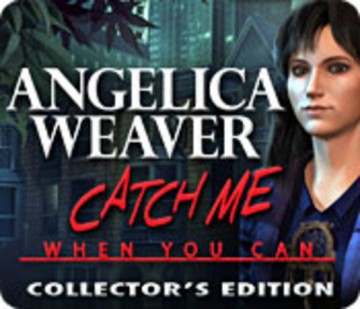 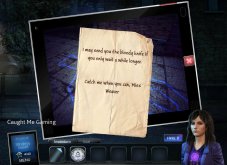 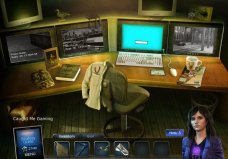 There is a bit of history with this game that has a lot to do with the blog you are reading right now! I discovered Angelica Weaver: Catch Me When You Can two years ago, merely by accident. I was trying to figure out what to call my new gaming blog on WordPress. I had just created an account after I had failed at getting my knitting blog, Picking Up a Stitch (now defunct), off the ground. Typing in some random terms into Google, I pulled together the search term “catch me game”, and up at the top of the searches was Angelica Weaver: Catch Me When You Can. At the time, the second search result was a website called “Catch the Game” that was an aggrigate site that pulled stories from other websites (it has since disappeared). In the end, I settled on Caught Me Gaming. There’s some blogging history for ya!

Anyway, I decided to check out Angelica Weaver: Catch Me When You Can on Steam. Its trailer made the game look great and it had an intriguing plot with a mix of puzzles. I bought it for cheap, and went to town.

Angelica Weaver is a Chicago Police detective with a unique psychic ability. In this story, she is tracking a serial killer wrecking havoc on the streets of Chi-Town, but gets telepathically ported to the 1900s where there is a killer following a similar modus operandi. Angelica uses her psychic abilities to put herself in the mind of the killers, who, she discovers are playing games with her. She can also get into the minds of the victims who give Angelica clues that help her solve the case. She wears a dreamcatcher around her neck, which provides a dual purpose: it allows her to time travel, and gives hints to the gamer within the gameplay. Thank goodness for it, because the plot was a convoluted mess. Not to mention, this game forced the player to do a ton of back-tracking, so it was easy to get lost.

The first time I started Angelica Weaver, I fell asleep about 30 minutes in. When I woke up about ten minutes later, I had lost track of the plot and what I was supposed to do…I chalked it up to a hard day’s work. I restarted Angelica Weaver a little later, fully committed and hopped on caffeine. Alas, that didn’t work either! I dozed off! Every time I loaded this game I would fall asleep 20 minutes into it EVERY. SINGLE. TIME. Steam says I blew through six hours of game time. More like six hours of nappy time! If I had to guess, I’d say I got through about three hours worth of gaming, but certainly not six! I am still trying to figure out if the game was in fact boring, or that it provided a calming effect that induced the land of nod. The jury is still out…

What should have kept me awake was the main protagonist, Angelica, especially due to the way she was treated in this game. Game developers thought it was a good idea to have an animated Angelica situated at the bottom of the gaming area near the menu system, while you try to play. She remains right there, creepily nodding away at every turn as you perform tasks in the game, like a super annoying version of Clippy the Office Assistant. To make it worse, Angelica had to open her mouth with a voice-over that mimicked my experience with the adventure game Dead Mountaineer’s Hotel (one of the worst games of the genre I have ever played!). Thankfully, I discovered the best thing ever: the option to turn off the voice-over and shut Angelica Weaver up for good in the options menu. Great! Finally. I can nap undisturbed!

Not to nitpick about the puzzle-solving in Angelica, but some of the solutions made little sense. In one part, I had a baseball bat and an umbrella in my inventory. If you were made to open a hatch with one of them, what would you choose?? Would it shock you to learn the knob of a baseball bat would do a good job of opening a floor hatch? I mean, I would have thought my umbrella would have done an excellent job, but whatever. In other puzzles, you are made to use a cellphone to take pictures for evidence. Angelica had one, but she kept losing it. In one scenario, there was a dead body that had a cellphone sticking out of his pocket. And hey, what the heck…she’ll just grave-rob that bloody corpse over there and use his! Why not? …These games, I tells ya…

Really, Angelica Weaver is an okay game with some annoying traits and a heavy plot. There are some decent graphics, however and the puzzles are okay enough that I think it has some appeal for Hidden Object fans, as long as they don’t fall asleep ten minutes in.

Angelica Weaver: Catch Me When You Can
Developer: Mumbo Jumbo
Released: 2013