I enjoy me a good puzzle game and I’d like to think the Nintendo DS is built for puzzle games. But, lately, I have to wonder. Just because a game is decent on one device, doesn’t mean it will port well to another.

Case in point, Safecracker. I found this game cheap at EB Games, and it boasted as being the ultimate puzzle challenge. Yeah, I don’t know about ultimate, but I would definitely have to agree with the challenge…

This puzzle game was originally released on the PC in 2006. The story sees you as a bonafide safecracker hired by heirs to a rich uncle’s fortune. You are charged with finding his last will, hidden away in one of many safes locked away in a large property. Each safe is a puzzle to solve, the mansion itself is a labyrinth of corridors, rooms and courtyards. The game showed some promise, but I am here to tell you this game blows. Or at least this version of it blows.

To start, you are given a compass, a magnifying glass, a map of the mansion and arrows to select direction…and it’s all useless. If a directional arrow points straight ahead, and the compass points going North, I expect to go north, not…spin around the room and wind up going east like this game had me going. The last time I took orientation with a compass, that isn’t how that was supposed to work. Second, the map of the mansion was somewhat helpful. A red X on the map indicates where there is a clue to find or a puzzle to solve. But because the navigation sucked, it was difficult to get to an X. Third, there was a toolbox that collected some items, but no journal entry capability. Those notes that I’d find, I had no idea whether I should commit them to memory or not. Lastly, the puzzles provided no instructions as to what you were supposed to do. I don’t mind if the goal is obvious. But, some puzzles had me scratching my head, like this puzzle for example: 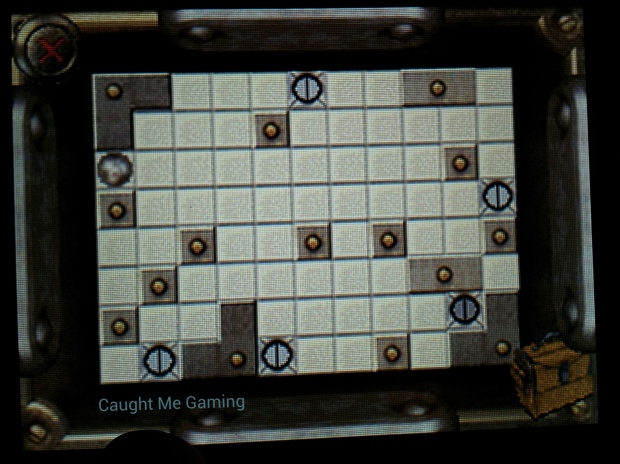 I think since I started blogging almost a year and a half ago now, the majority of games I’ve played that were next to no good were games played on the Nintendo DS.  I don’t want to disparage the device itself because I really do enjoy the DS…but, I think often games that are ported to the DS are the problem. Poorly ported seems to be Safecracker’s issue and I wouldn’t mind seeing what the PC version is like.

Needless to say, I do not recommend Safecracker on the Nintendo DS. The search continues for good puzzle games on this device!