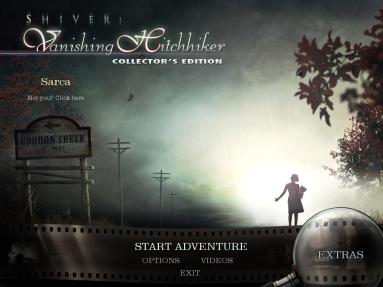 The animation is really something spectacular

One of many scenes where you need to use a flashlight 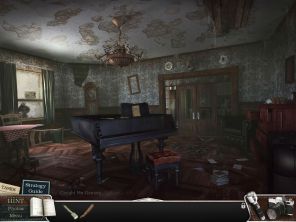 If you look at the left hand corner, a shadow can be seen in the window

Boo! An eye peers back at you

I have posted this review before – one of my very first from June 2013! I have since replayed this game, adding some decent screenshots. I thought I would provide a more fullsome review of one of my favourite hidden object games ever! Enjoy!

Let me tell you about the first time a video game made me sweat in fear. I mean, of course there were others since, but this one set the bar for what would make me love the Horror Video Game genre. That game was none other than Shiver: Vanishing Hitchhiker, and in my opinion, it is one of the best horror hidden object games that currently exists.

Vanishing Hitchhiker is the first in a thrill-ogy of spooky hidden object games that also includes Shiver: Midnight Grove and Shiver: Poltergeist. But, if we are to look at all three and compare, Vanishing Hitchhiker is the strongest game overall. It was unexpected. Its graphics and gameplay were unparalleled to other Hidden Object games at the time I played it a few years ago on PC. I had played others before that tried half-heartedly to be scary by using abandoned buildings, darkened corners, and ooo look! a cobweb! But, this game was downright macabre and suspenseful, and my perspective hasn’t changed as Autumn sets in and we count down to Hallowe’en; I get a hankering to replay this game about once a year. It still looks great and sounds great, and it still manages to give me the willies.

Shiver: The Vanishing Hitchhiker takes its story from the book of urban legends. Wikipedia has quite an extensive list of how the vanishing hitchhiker trope is used in storytelling. In this particular case, a dude (played by you) is driving on a rural road during a torrential downpour and stops to pick up a hitchhiking girl who is drenched from the rain, and clutching a teddy bear. The girl asks to be driven to her town, where she is dropped off. The dude drives away, but notices the girl has left her teddy in the back seat. He turns around and drives back to town to find the girl and give back her teddy, but she has vanished. He then finds himself searching a creepy abandoned town for the girl. And so the game begins…

Now, if you decide to play the game, don’t look too much into the ridiculousness of the story. This one incorporates cemeteries, an old hospital and an island with some sort of native burial ground on it – typical fodder for hidden object games. Oddities of this story aside, Vanishing Hitchhiker is very well made and the graphics are beautifully detailed. Sure, the scenery is dark and dreary, but you can tell a lot of work went into its execution. To tie the horror element together, the scenes are juxtaposed with a gorgeous, yet haunting, soundtrack.

If you want to know what I found was the most unsettling about Vanishing Hitchhiker…it was having to explore the dark nooks and crannies of old dusty houses, barns and wells using the dim glow of a flashlight. You innocently enough check around corners with your Maglight when you peek through a keyhole and…BOO! An eyeball stares back at you…or shadows run past you.

When I first played this game, it was only available on PC. It has since been ported to mobile devices (iOS and Android), and if it is anything like others I’ve played on my tablet, I am sure it looks great. I have extolled the virtues of Shiver: Vanishing Hitchiker many times before, but I cannot emphasize enough how good of a game this is. Give it a try – you won’t be disappointed!