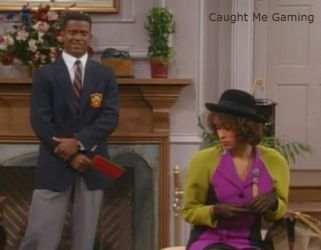 Ashley, Will and Jazz

“Now this is a story all about how my life got flipped-turned upside down. And I’d like to take a minute, just sit right there.
I’ll tell you how I became the prince of a town called Bel Air…”

The Fresh Prince of Bel-Air??

You’re probably wondering why I would be reviewing an old sitcom from 1990 when EVERYONE has seen it before.

Well, everyone has, but me. The Fresh Prince passed me by. I am a first-time watcher.

I wasn’t allowed to watch TV on school nights past 5:30 PM when I was young, and later in high school I really had to work hard to learn anything (studious, yet learning disabled, me) so I missed out on a lot of shows. I’ve caught up on many of them, since.  For example, I didn’t watch the Simpsons until I left for University in 1993. I started watching ER on re-runs in the late 90s. There are some exceptions, of course, but I missed out on a lot of the shows that aired.

Fresh Prince was one of those shows that just was not on my radar. Will Smith and his pal Jazzy Jeff’s funky “Parents Just Don’t Understand” was a big-time song for my sis and I when it first came out. We memorized the lyrics too. But, time passed, and I forgot about him. Then his TV show began, and everyone around me was watching it…except me. When I noticed a few weeks back the Fresh Prince of Bel-Air was on Netflix, I decided to see what it was all about.

Will Smith plays a teen from West Philadelphia whose mom shipped him to live with his Aunt Vivian and Uncle Phil in Bel-Air, California to escape schoolyard gangs that were making trouble for him. His Aunt and Uncle are wealthy, live in an affluent neighbourhood and are raising their three children: The snobby fashion conscious Hilary, the serious Carlton and the fun-loving adorable Ashley. Along with butler Geoffrey and his best friend, Jazz (played by Jazzy Jeff Townes) Will attempts to get his bearings as he adjusts to a new family, new school and a new set of house rules.

What is fun about this first season is how the TV show tries to incorporate Will Smith’s rap career by using baseline tracks of his songs in the background of the show, as well as providing the audience with a taste of his talent for dancing and singing. This guy does have talent, and his neon-coloured clothing aside, he really shone in 1990. He certainly is fresh-faced; his delivery, very fun-loving. The story-writing  and humour are derivative, but hilarious. I will say the perpetual fat jokes are alive on Fresh Prince, and I have to admit, they are a bit cringe-worthy with the overweight butt-of-jokes Uncle Phil… who is big…. and loves to eat…You get it…

Overall, the first season of Fresh Prince of Bel-Air is a lot of fun. Light as a feather and full of hilarity. If you haven’t watched it yet, you are missing out!