This is my Tenth entry in my gaming diary for Mass Effect (Xbox 360).

Update from part 9 of the Gaming Diary:

Pepe Shep and crew head out into a snow storm to find the Bewwwbly Matriarch on the planet Noveria.

Shep and crew pile into that confounded 6-wheeler known as the Mako, to power through a blizzard that is ravaging the planet Noveria. Their plan is to go find the Bewwwbly Matriarch up on an area hilariously called Peak 15 (at least it isn’t called “Peek” 15, although, we’ve all seen enough of them, haven’t we?)

With that, in case you’ve forgotten who this Bewwwbly Matriarch is:

The crew arrive at Peak 15 after fighting a ton of geth. The facility is shut down for the most part, and Shep needs to fix the power. Along the way, they encounter these…gross looking insect things called rachni that look like…blech!

These things called Rachni crawl around and appear when you least expect them. They also spit this green venom at you and send their babies to try and kill you. They weren’t that difficult to eradicate, fortunately but were all over the place.

Shep manages to find the main Peak 15 computer called “Mira” that educates Shep a bit in what happened there. Shep then goes deep into the computer’s core to reset its modules.

Folks, at this point, it’s CASUAL GAMING TIME!! Yep, that’s right, Mass Effect has casual gaming puzzles within! In order to repair the computer, you are made to do a Hanoi Tower puzzle! At last! Something I am familiar with!! I mean, how many hidden object puzzle games have I played that had this puzzle in it??

The power is restored, and everyone’s happy, right? Time to go home, Pepe? Not so fast!

In our journey to find the Bewwwbly Matriarch, we encounter a security Commander charged with looking after the area. He informs Shep that the place is overrun by rachni (no sh!t, Sherlock…). Mrs. Bewwbs is in the hot labs shaking things up in there. Finally, we confront her there looking after a rachni queen locked in a glass chamber and she tells us how overpowering Saren’s Jedi mind tricks has over her. She has a window of sanity that is open long enough to explain the rachni are trainable beings that were being bred there to create foot soldiers for the Saren “destroy all humans” campaign.

What comes next sounds vaguely familiar…Originally, rachni were bred by the Protheans and used by them to fight in war. Of course, like the geth, they learned too much and turned on their masters. Back then, they managed to wreck havoc in the galaxy. The Protheans tried to eradicate them, killing over 200 worlds in the process. But, they didn’t get them all, and they managed to breed and colonize.

Big bugs colonizing and wrecking havoc?? I feel like I am talking about roaches and the Orkin man, here. 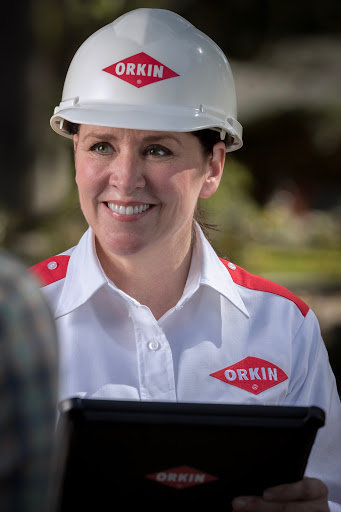 Sure, he can solve your silverfish problem, but what about rachnis? (Photo: lh5.googleusercontent.com)

Anyway, things did not turn out well for Mrs. Bewwwbs…them hoots went to hooter heaven as she turned on Shep and crew, sending her troops on the attack. Shep made quick work of her.

The rachni queen talking through this asari soldier (who is actually dead…) (Photo: i1.ytimg.com)

The rachni queen locked in the glass chamber manages to talk to Shep through one of Mrs. Bewwbs’s dead asari soldiers, basically asking Shep to let her people go or kill them outright. Their life has been misery, and they just want to live in peace. She would make a point of teaching her children about Shep’s kindness. (Aww) I chose to let her go.

However, there are still evil rachni on Peak 15 that are beyond saving and continue to cause trouble. A neutron purge solved this after speaking with a lone researcher found in the hot labs who explains everything they were doing with the rachni there. Ironically, he gets impaled by a rachni, himself. Boo.

After eliminating the evil rachni, it was the end of this chapter. I have to say, this was the quickest chapter play ever in the game, and saw the most action. It flew by! I am managing to make sure I upgrade my weapons for each team member. I think this is what is helping me through the battles at this stage.

Instead of proceeding to my next chapter, I am taking the break to do some side missions that you can do if you want. Some of them involve landing on planets and picking up ore samples or investigating. Admittedly, I have had to bail out of a couple of them because the battle with some of the beasts was too intense, or I didn’t have enough technical experience to handle fixing certain things. Ah well.