After I finish what I consider a decent game, I often check out the game’s developer to see what other games they’ve made. Who knows; maybe I’ll get to play another great game.

Take Syberia, a Microïds-produced game: I enjoyed this adventure game very much, and in fact, I consider it one of the better ones from the early 2000s. Throw forward a couple of years following its release, and we have another Microïds-produced game called Still Life, also an adventure game, highly regarded by critics for story and gameplay. Having just completed Still Life, I have to say I don’t share the critics’ enthusiasm.

Victoria McPherson, detective with the FBI is charged with investigating a series of sinister murders in 2004 Chicago. Her Grandfather, Gus McPherson was a P.I. back in the 1920s, who investigated similar cases involving the murder of prostitutes in Prague. All these murders have a Jack The Ripper sort of flavour as both murder suspects in both time periods dress in a cloak and top hat wearing a mysterious mask. The story is split between both Victoria and Gus, and their experiences. The reference of “Still Life” has to do with an artist who liked to paint prostitutes back the 1920s, the same ones who would eventually be found murdered.

The good: Okay story, most graphic elements are half-decent.

Still Life is touted as an adventure game, but really I find it is more an interactive story than a game. In most adventure games, you click the mouse to send characters where you want them to go, interact with objects and solve puzzles, but, there wasn’t a lot of actual puzzle-solving in Still Life and basically you are left clicking characters from one scene to the next. Long-winded dialogue between characters also takes the click of a mouse with no ability to skip through or choose what is said, which was one major beef I have with this game. Instead of a dialogue scene, each time something was said by a character it took a mouse click to keep the conversation going. LAME!

The game is very linear with little room to explore your environs because the character will tell you, “I don’t think I need to go there.” To that end, the game does give you a pretty decent map that sends you to an area by mouse-click. The puzzles are not fun and really do their best to screw with you. In one puzzle, you are made to bake cookies (yes – COOKIES). The measurements given in the recipe call for a cup of this and half a cup of that, when the measuring cup they provide is in milliliters, not cups! WTF?!

Some of the interactions the characters had with objects were stunted, peculiar, and obscure. For example, in one “gameplay” sequence, the boss tells Victoria to get him a cup of coffee, thus ensueing a witchhunt for his coffee mug, which you wind up finding in some random interrogation room. Made no sense. 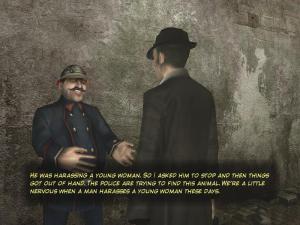 The main characters in Still Life overall looked alright,but moved stiffly. The secondary characters for the most part were exaggerated and out of place with the life-like main characters. You’d often see them with big hands, big faces, big “idiot” voices!  The voice work vacillated between good and completely stereotyped. For example, one black police officer was obviously voiced by a white guy trying to be a soul brotha and failed miserably. And then there was the lesbian seductress who obviously was voiced by the same actress who voiced Victoria McPherson, only with a bit deeper and “sultry” (or is that slutty?) intonation. 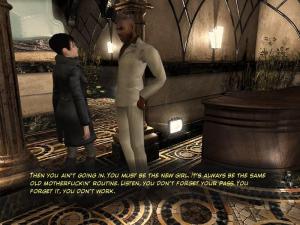 One major problem I encountered running this game: I had to change my screen resolution just to get Still Life to even play on my Windows 7 gaming PC. There were some major compatibility issues that I thought would have been fixed, or at least a patch would have been provided…especially since I bought the game through Steam!  There is apparently a lot of complaints from folks on the internet about that. I would have figured by now, ten years later, someone would have gotten their shit together on that front.

Critics say Still Life is supposed to shiver your timbers…Some segments did make me go “whoa,” but it wasn’t scary. This is certainly not a game for kids – there are very mature themes, nudity, and displays of naked women cut up slashed and dead. Some strong language may offend.There wasn’t a time that I was frightened by the game, but there is some tension in the storyline and having to look at dead bodies can make one squirm. There are some violent action sequences as well.

Still Life is a long game: I clocked in over 7.5 hours of gameplay. That said, I have to say the story was enjoyable enough, but I would have probably enjoyed Still Life more reading the story than playing it. If you’re after an interactive story game, this is it. If you are after adventure, you will be disappointed here; check out Syberia instead.