Who would have thought that a hidden object game would teach me a thing or two about American history. Being Canadian, I never came across the story of Nathaniel Hawthorne. The only thing I knew about him is that he wrote the Scarlet Letter. 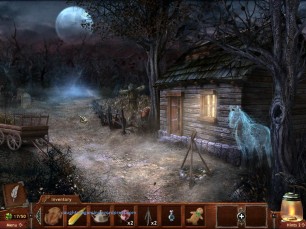 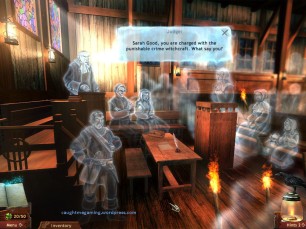 What does Hawthorne have to do with Salem Witches? Well, Hawthorne was from Salem, Massachusetts, home of the famous Salem Witch Trials of 1692. Hawthorne had an ancestor, John Hathorne who was a judge on those trials who never repented for his involvement. Hawthorne, embarrassed by his legacy, added a “w” to his last name to hide his ancestry. This element plays a big role in the plot of the game.

In Midnight Mysteries: Salem Witch Trials, we first meet up with the ghost of Nathaniel Hawthorne who died in a snow storm. He comes to you seeking answers as to what happened to him. Along the way, we meet a varied cast that includes accused “witches”, former President Franklin Pierce, as well as Abraham Lincoln. The plot twists and turns leading the gamer through Hawthorne’s history, some factual, some fiction.

Of course, Midnight Mysteries: Salem Witch Trials fudges, fabricates, and adds some ghosts and native American elements to spice things up, but that aside, this was a great game! There are interesting puzzles, clear hidden object scenes and some smooth and spooky music to go along with it. There are some fun elements too, like finding hidden clover, or clicking on any crows you find to get an extra hint point.

The game is relatively short – I finished the game in under three hours – but that’s no reason not to check this one out. It’s a good’un!