I love a game that incorporates a good murder mystery. Even better if there are interesting plot twists that keep me playing to the end.

I just finished a half decent mystery adventure game on the PC called Alter Ego. The game had elements I always look for in a good mystery game: looked great, sounded great, interesting story with great characters. I know, it’s a tall order. And often games DON’T get it right, but Alter Ego met the criteria. 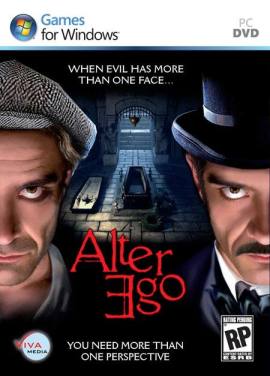 Alter Ego has an intriguing plot with a twist. The story is set in late 19th century England. In the first act, we meet Timothy, a petty thief from Ireland. We learn he is looking for his buddy, Brian, so he can act on his dreams of going to America and bring Brian with him. However, as it turns out, Brian, distracted by his desire to make fast money, has some other ideas of how this should go.

Meanwhile, we are introduced to Detective Briscol, newly recruited to the local police department, who has been deployed to a cemetery in town where the corpse of Sir William is missing. William is known by the townfolk as an eccentric recluse and suspected murderer. Complicating matters, there is someone murdering key players in Detective Briscol’s investigation. Sooner or later, Briscol’s and Timothy’s paths meet in what is one interesting murder mystery.

One thing I have to acknowledge is how rich the character development is in Alter Ego. For example, you could not find two of the most different characters to play off each other; the detective almost apes Sherlock Holmes with his proper English way and manner of speaking, while Timothy is someone who comes across to others as kind and polite but is really crafty and conniving as well.

The gameplay is like your typical point-and-click adventure game on PC, and uses a keyboard and mouse. You lead your characters where you want them to go, and you control the dialogue where you are given a number of dialogue choices to pick through. The game looks great! My husband who is not into these types of games even remarked how good the game looks.

Of course with a good game, there can always be improvements, starting with the interface. I played Alter Ego for about an hour before I remembered to save the game (my bad…). The usual ESC key would not exit me to the start screen to save. I then was not able to exit out of the game AT ALL, until I went through the task manager in windows. Of course, this didn’t save ANYTHING, and I had to start the game over (boo!). The game came with a PDF of instructions on the game which included keystrokes to access menus within the game and such – but nothing about how to save the game! I finally figured it out that it IS the ESC key you use to save the game, and that you cannot save the game if there is ANY action happening within the game: no dialogue, no waiting for you to move your character and no puzzles. Why wouldn’t this PDF tell me any of this??

In some scenes where two characters are carrying on in conversation, we see the two characters scrunched into a corner, often with one character’s back “to the camera.” I’ve noticed this tactic often in adventure games. I am not sure if it’s easier (or cheaper?) for the animator to work with the characters that way. At any rate, how interesting is it to look at this for five minutes at a time:

Hey, Detective! Would it kill you to turn around once in a while?

Small critiques aside, Alter Ego is a good point-and-click adventure game that looks and sounds great. The characters are well-developed and the plot is very well-written. Fans of mystery games will surely enjoy this one.