I was so looking forward to playing a sequel to the Shiver franchise. I fell in love with Vanishing Hitchhiker, and when I heard Shiver: Moonlit Grove was coming out, I had to see if it lived up to its predecessor. However, playing the game gave me a different impression: someone should have told Artogon, the game’s developer, to keep them brownies in the oven a lot longer.

First up, before I talk about the plot, I have to say that before playing Moonlit Grove, I watched the trailer of this game, and thought it looked crisp, clean and full of awesomeness. Everything I was hoping for went down the drain when I started the actual game, and got cut scenes that were a blurred pixelated mess. I mean, we’re not asking for Disney here…if you are using animated cut-scenes, you better make sure the production value is there or don’t have them at all. This game looked terrible from the gate.

In Moonlit Grove, you play a man at the turn of the 20th century who was orphaned in his youth, and was adopted by a doctor. In HOG tradition, your adopted Dad goes missing, and you are tasked with trying to locate him. While on your way to find him, a pack of wolves overturn your horse-drawn carriage. Travelling on foot, you come upon a peculiar village where you are then forced to knock down doors for help. And, well, you discover something isn’t “quite right” with this village, and the people that inhabit it. Oh, and you are also a doctor, so these weird people will hold you captive and force you to heal their sick. Yeah, the plot of this game is kind of lame-ass. It just spirals into this five directional octopus that makes a lot of nonsense.

The game, thankfully, doesn’t look as bad as its animated cut-scenes. Some of the landscape scenes are very desktop-worthy. The gameplay itself was actually pretty good, and had a great variety of “collect this to make that” type of puzzles. I was surprised, though, with the low number if hidden object scenes (about one per chapter). At that the hidden object scenes had some interesting puzzles within them too, where you had to pair two objects together to make the one object you are searching for. Pretty interesting!

Check this out – Artogon is capable of some great work!

How some of the characters are rendered in the game border on bizarre and disturbing. In one scene, you are held captive by strange looking “crazy-eyes” (er, what I’m calling him…); an old troll who wants you to save his pretty grand-daughter from near death as she was shot in the arm. You, being a doctor, have been charged with saving her life. Help, or else old Crazy-Eyes will impale you with an axe.  […which, really doesn’t make any sense. If he kills you for not helping him with his grand-daughter, then he also loses his grand-daughter, right?]

I really can’t ignore the fact that this particular character is rendered more like a photograph than other characters. Perhaps I’m looking too much into this, but when one character sticks out like a sore thumb, that to me screams lack of continuity.

Okay, okay, whatever you say…just stop looking at me!! 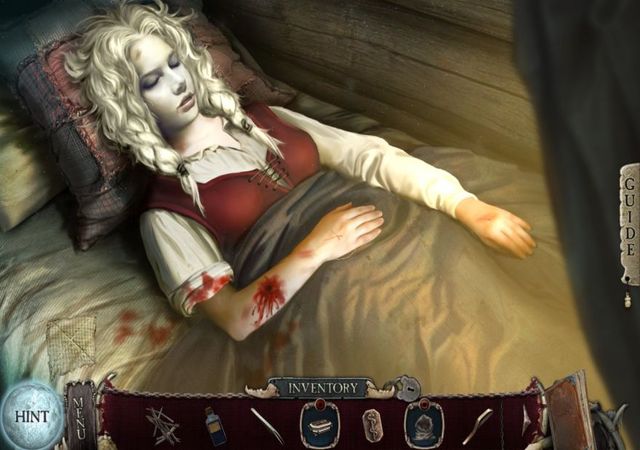 The grand-daughter, looking realistic, but not real.

Ultimately, I was really hoping for more from Shiver: Moonlit Grove. Artogon is a great developer, but they really needed to let this one rise in the oven. It’s a bit undercooked.