Does anyone remember the movie, Shutter Island? I do…I didn’t like it that much. And I usually enjoy watching Leo DiCaprio. I certainly appreciate most of what Mark Ruffalo has done. But Shutter Island didn’t really leave a lasting impression. So, why would I get my hands on the game based on the movie? Well, Shutter Island was creepy, and I happen to like creepy games…so I was hoping for a creeped out good time, when I played it on PC. I have to say that creepy was not in the cards with this one. 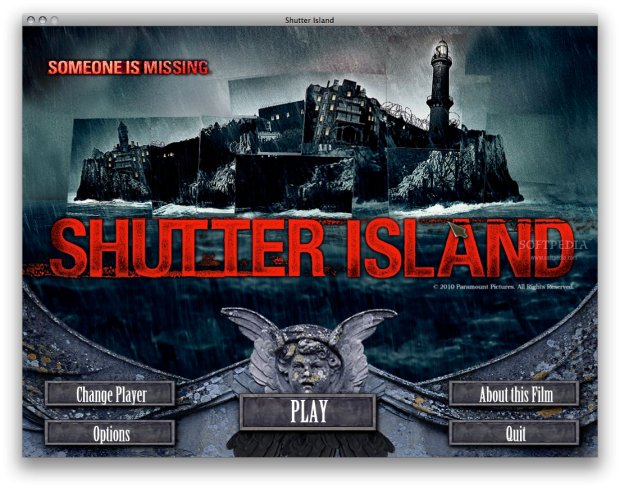 In Shutter Island, you play Leo’s character – a U.S. Marshal investigating the disappearance of a woman from a mental institution situated on an island. You and Mark Ruffalo go from room to room, from hidden object scene to hidden object scene, collecting sledge hammers and file folders. What this has to do with anything, is anyone’s guess; It certainly does not move the plot of the game that much. But, while we are on the plot, the game does recognize DiCaprio’s descent into madness, hiding it behind wicked migranes that cause him to hallucinate. You play DiCaprio in first person, so in some scenes, you see what one would see with a migrane – spots in you vision, red capillaries – while having to search for items in a hidden object scene. That play device was quite interesting – one I haven’t come across too often in my gaming experience. Unfortunately, I found myself on the receiving end of my own migrane whilst playing this game.

I wished more for Shutter Island. The cover touts the game as an adventure game. It isn’t. The game tells you what to do every step of the way, and there is no adventure aspect at all. The game isn’t scary or creepy either. The only thing remotely creepy was the music, and I am certain I’ve heard that same music in another game before. As uninteresting as the plot was, I found myself moving from one hidden object scene to the next in the hope that something would develop further, only to discover more of the same. And while we are discussing the hidden object scenes, they were poorly rendered, blurry, and each object is teeny tiny. You can always guarantee that the object you are searching for is hiding behind a big piece of furniture with only a corner of it sticking out – not fair!

I am guessing the game didn’t get the rights to Leo’s likeness, because I got to see actors like Ben Kingsley and Mark Ruffalo in the game, but Leo’s image wasn’t there. Perhaps he knew this wouldn’t be up to his standards. It certainly wasn’t up to mine.