Ahem, actually it was $1.02 Canadian on Google Play, but still…El cheapo. I came upon an app called Appsales that notifies you of Android apps on sale. Flipping through, I was curious to see if there were any games that have gone down in price. According to Appsales’ history, Sacra Terra: Angelic Night was advertised for $1.02, a 50% discount four months ago, and surprisingly, it is still at that price. I couldn’t resist playing this game on my Android tablet, as I had played it on PC a couple of years ago and had fond memories of it. Sacra Terra: Angelic Night is full of everything – great graphics, great gameplay and plenty of hidden object puzzles to keep the HOG fan happy for at least a couple of hours. It is from Alawar, the developers that brought you Twisted Lands: Shadow Town, and that game wasn’t bad. 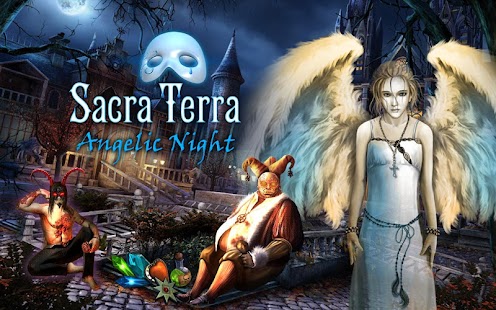 Angelic Night starts predictably in an abandoned mental hospital where you wake up disoriented. You soon discover a spell has been cast, and demons representing the 7 deadly sins are poised to take over the world. It is your task to destroy these demons and save the world from damnation. Soon, you meet up with an apparition of a beautiful angel who is there to guide you through your task.

I really enjoyed this game for its puzzles and hidden object scenes alone. The plot was a bit of a stretch, and what was this game’s weakest element as it had some confusing plot twists and turns that really went over my head. At any rate, the graphics were well-rendered, and you could actually see even the smallest speck on screen. The PC and Android versions are very similar; it has been two years since playing the PC version, so the brain’s a little foggy – but I’d hazard they are the same game.

The negative for me? The Android version of Sacra Terra: Angelic Night crashed every time I moved from one scene to the other on my tablet. Every time! I’m not sure if my tablet’s recent update is causing problems…I would still recommend buying this game on either the PC or Android device, even while it might crash – that says something about the game!