Something is cooking at the San Francisco police department’s homicide squad. Bodies are piling up, and it’s up to Lindsay Boxer to solve the cases; a detective who perpetually stays out late partying with her girlfriends. She is meticulous with cleaning up the murder scene before she takes evidence, interrogates people with misinformation, and at the end of a long day, hangs with her lawyer / journalist / forensics friends while they gossip about Lindsay’s latest cases. This is what you have in store while diving into James Patterson’s Women’s Murder Club: Games of Passion game for the Nintendo DS. Also, if this is the type of plot James Patterson writes, I think his career should be in trouble. 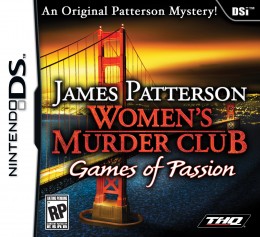 Okay, I admit, that was a cheap shot. To be fair, I am not a James Patterson fan at all. I read When the Wind Blows years ago, and it didn’t leave a good impression on me. I am also not familiar with the series of books that stars four “crime fighting” friends by Patterson that also spun off into a TV series, but whatever. Who am I to pass on a potentially decent game that would combine my love for reading and my enjoyment of hidden object games? 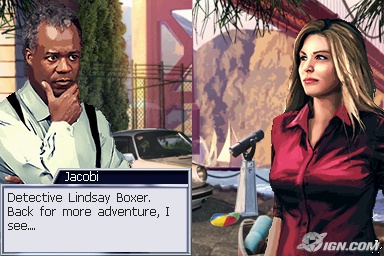 Games of Passion is a murder mystery, interspersed with very easy hidden object games. The graphics are nice throughout the game actually. It’s the story itself that, at times, seems confusing, convoluted and convenient and really not based in reality. Case in point: what detective arrives at a crime scene and decides to do some housekeeping, clearing clutter and garbage before picking up evidence? Isn’t that evidence-tampering? I get that this was a ploy to allow players to have some hidden object element, but really – is Lindsay a homicide detective or Molly Maid?

I don’t know if maybe I have the attention span of a gnat, or that my reading comprehension is off, but you almost need to take notes to remember who did what. Thankfully, Games of Passion is a no-lose game for doofuses like me who can’t figure out what “suspect” left what object where, and who did what. That said, Lindsay would report back to her friends who she suspects, and if you got the suspect wrong, her friends would say, “that doesn’t sound right to me” without being penalized. Whew! I thought for sure I’d be kicked out of the Women’s Murder Club for naming the wrong suspect!

I also need to point one major gameplay flaw – for whatever reason, the game often doesn’t detect when you are selecting an object with your stylus. You have to press sort of next to the item you are trying to select. I have read a few other reviews on this game, and this seems to be a well-known problem with Games of Passion.

Overall, James Patterson’s Women’s Murder Club: Games of Passion is for very casual gamers who like to read while gaming, and like to play simple hidden object puzzles.