Murder, She Wrote was a TV show that ran from 1984 to 1996 and starred Angela Lansbury as Jessica Fletcher, a mystery writer from the quiet fictional town of Cabot Cove, Maine, who, in each episode, happens upon a murder, and who seems to figure out ‘whodunit’ by the end of the show…It was my Mom’s favourite show to watch on Sunday nights, and anytime it’s on TV on reruns, I am tempted to tune in to immerse myself in nostalgia.

That is why when I heard that there was actually going to be a Jessica Fletcher hidden object game, I was intrigued, thinking, ‘How the heck are they going to pull that off?’concluding with, ‘It’s gonna be cheesy!’ After playing Murder, She Wrote: The Game – Part 1, I have to say the game’s developers, Legacy Games, tried very hard not to make the game suck, bringing in acclaimed Murder, She Wrote writer, Dr. Anne Del Borgo to write the stories behind the game. I also read where Angela Lansbury agreed to have her likeness used in the game (but she wasn’t involved in its production).

Murder, She Wrote – Part 1 is a big game that has five mystery stories within it. The stories are primarily based in familiar Cabot Cove, and each with its own murder mystery that Jessica tries to solve. Some familiar characters are there, such as Seth, the town Doctor, and of course, Mort, the Sheriff, who is his same suspicious self. 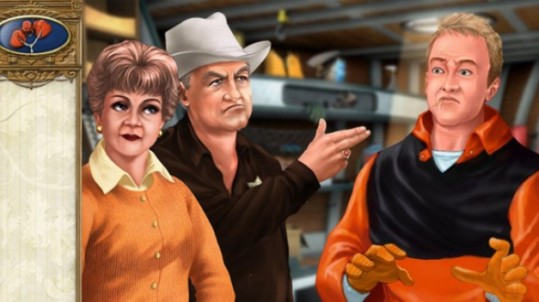 – Hey, you’re wearin’ gloves! You out to murder someone? -Um, I wear gloves ’cause I’m a fishmonger, sir…

The graphics are well done, not too detailed but well-drawn. What is most interesting is the quality of the voice acting. I couldn’t help but hear a bit of Angela Lansbury in the voice actor, even though it wasn’t her; they certainly got her cadence right.

The hidden object component is fun. Some of the games give you a list of hidden objects whose words are missing vowels (sort of a puzzle within the puzzle). The vowels are filled in once you locate missing typewriter keys which are scattered around the scene you are searching.

The game gives you a 20 minute timer for each puzzle. In some scenes, you are solving puzzles around dead bodies, which, for Jessica Fletcher, seems to be a normal day, so if corpses bother you, I guess you’ll be passing on this one. 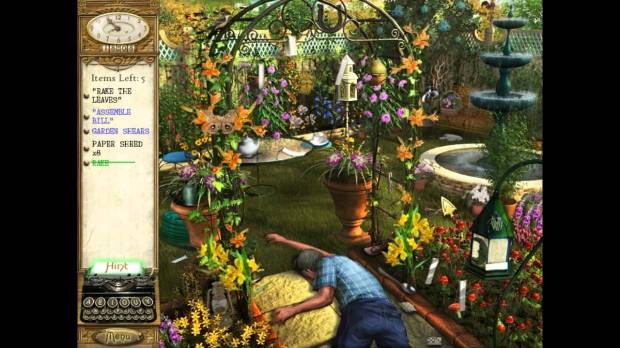 Let’s just look for some items, and –oops! Yeah, watch out for that there body…

This game is a win-win for HOG lovers and fans of Murder, She Wrote. Part 1 really captures the simplicity of the show and the richness of the characters from the original series. I’m looking very much forward to playing the sequel, Part 2.

BTW, if you are looking to purchase this game, it’s cheaper to buy from Legacy Games – $6.95. Big Fish Games is selling it for $10.21. Just putting that out there.